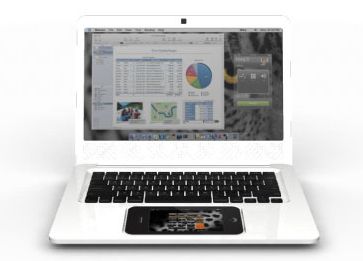 Who says all netbooks are alike? OK, I may have been guilty of saying something like that on a few occasions. After all, practically every netbook released in the last few months has a 1024 x 600 pixel display, an Intel Atom CPU, and similar storage and memory options. Sure, every now and again someone like Gigabyte comes along with a tablet-style touchscreen device, or some companies decide to install Windows CE instead of Windows XP or Linux. But for the most part, until we start to see dual-core machines, or netbooks running the VIA Nano CPU, most netbooks are a lot alike.

And then along comes OLO, a company that wants to build a netbook around your iPhone. While this isn’t the first clamshell device based on a cellphone or PDA platform we’ve seen, the OLO computer is a bit different from the ill-fated Palm Foleo or the CELIO Redfly for Windows Mobile. That’s because the OLO computer doesn’t just connect to an iPhone via a wired or wireless connection. You actually insert the iPhone into the notebook itself and use the iPhone’s touchscreen as a trackpad for the computer.

It’s not clear at the moment what kind of software OLO will be adding to the table. The iPhone does technically run a stripped down version of OS X, so perhaps the image above which shows an OLO computer running what looks like a full desktop version of OS X is plausible. But then again, there’s a good chance it’s just a mockup and all the OLO will really let you do is use Safari Mobile and other iPhone apps on a larger screen with a real keyboard.

There’s no release date, price, or real specs available at the moment. And with rumors flying that Apple is preparing to launch a sub-$800 notebook of its own, the OLO concept may be DOA. But it’s certainly one of the most interesting netbook concepts I’ve seen in a while. And since it would be built around the iPhone with its always-available internet connection, this truly would be a netbook.