Apple’s new iPhone 6 and iPhone 6 Plus begin shipping on September 19th… but Apple isn’t getting rid of last year’s models just yet. Instead it’s making them cheaper.

The iPhone 5s will continue to be available, but now the starting price drops to $99 when you sign up for a 2-year contract. The iPhone 5c, meanwhile, is free with a contract. 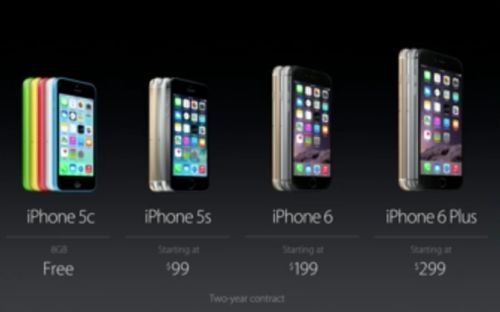 For the past few years Apple’s been taking a similar approach by launching new phones and lowering the prices of older models simultaneously.

This lets the company treat older phones the way other companies treat new entry-level phones. But now that Apple has introduced two new phones simulatenously, it means that the company has models that start at $0, $99, $199, and $299… at least when you sign up for a contract.

Even the cheapest models will be significantly pricier if you buy them off-contract.