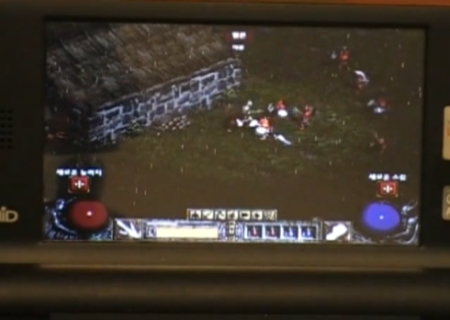 Netbooks and ultra mobile PCs get panned sometimes because they’re not as powerful as larger computers which are often the same price or even cheaper. But you know what? Even a tiny device with a slow processor like the handheld UMID M1 are reasonably fast compared with an average computer from 10 or 15 years ago. And that means they can often play some pretty awesome games that were designed to run on older computers.

Case in point, NewGadgets.de dug up a video showing Diablo 2 running on the UMID M1.

The M1 has a 4.8 inch, 1024 x 600 pixel display and a low power Intel Atom Z5xx series processor. It’s available with 8Gb to 32GB of storage space and 512MB to 1G of RAM. It’s not exactly a high performance machine, but Diablo appears to run very smoothly. I suspect other classic games would run just as well.

The UMID M1 is available from Dynamism for $449 and up.

You can check out the Diablo II demo video after the break.