Millions of computers are discarded every year: the EPA says that more than 30 million laptop and desktop computers were disposed of in 2010, with about 20 million more going to recycling programs.

But just because your old laptop isn’t fast enough to handle the latest video games anymore doesn’t mean it can’t be put to good use.

Researchers at IBM and Radio Studio in India are working on a project that takes the batteries from discarded laptops and repackages them into systems that can power LED lights for up to 4 hours per day for up to a year. The idea is to squeeze the remaining juice from those batteries to provide light in developing nations where reliable electricity might be unavailable. 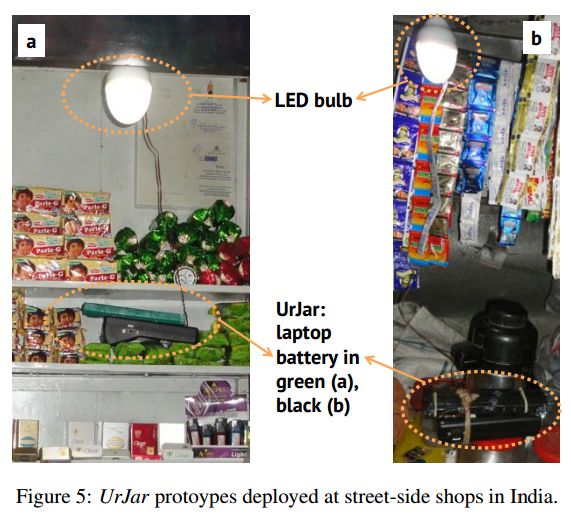 The team developed something called an UrJar, which takes rechargeable Lithium Ion cells from discarded notebook batteries and puts them into refurbished battery packs.

Then the pack is hooked up to a charging circuit, converters, and other hardware so that users can charge the batteries when energy is available and use the UrJar to power LED lights, fans, or other low-power electronics when there is no other source of power.

Prototypes have been tested in India where they’re designed for residential and commercial use: a shopkeeper can take the UrJar home and charge the battery when there’s available power from the energy grid and take it to work to power lights that allow that person to keep the shop open later into the evening even when the grid isn’t providing power.

The idea of taking unused batteries from one device and re-purposing them for use in another seems pretty simple. But if this project becomes more wide-spread it could have a big impact in two different areas: reducing global electronic waste and improving quality of life in areas with unreliable access to electricity.

Early testers were provided with UrJar units for free, but after using them for a few months said they’d be willing to spend up to $16 to buy one that came with a 1-year warranty. But according to an MIT Technology Review article on the project, IBM isn’t considering the UrJar as a commercial product, but instead says it could be something that’s offered for free in poor countries.