Google is letting Android app developers create custom voice actions for their apps, letting users new ways to launch and use those apps with a voice command.

So how does it work? If you’ve got the NPR One app installed on your phone, just say “OK Google, listen to NPR” and the app will launch and immediately play the latest news. 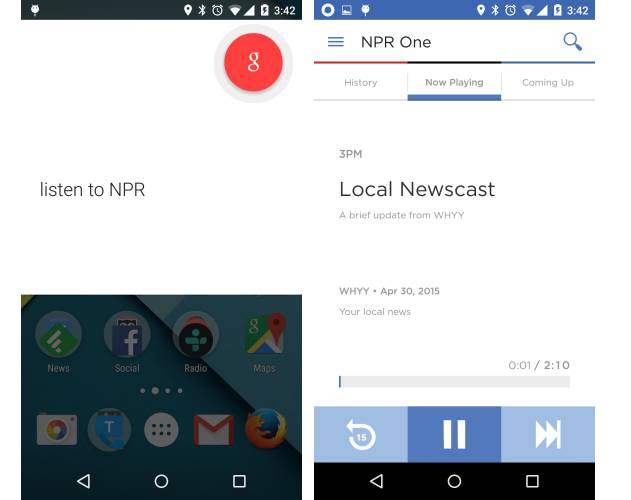 Note that this only works with certain voice actions that have been programmed. For instance, while “listen to NPR” fires up the NPR One app and begins playing news stories, “what’s the latest news from NPR” brings up a Google Now news card showing headlines from the NPR website. It does not launch the NPR One app.

Right now Google is working with a relatively small group of partners including NPR, TuneIn, TripAdvisor, Flixter, Shazam, Walmart, Trulia, Zillow, and Realtor.com. But eventually Google plans to open up the feature to more developers.

Here are a few voice actions you can already try if you’ve got the appropriate apps on your phone. Just start each request with “OK Google” or by hitting the mic icon:

Interestingly, that last one works with TuneIn, but not TuneIn Pro — I already had the latter installed on my phone, and it didn’t work. But I installed the free version of TuneIn and it works as expected.