The Asus Eee Pad Transformer Prime is a 10 inch Android tablet with a quad-core processor and an optional keyboard docking station… and a locked bootloader. That means you can’t install custom firmware on the tablet unless you unlock the bootloader — and as promised, Asus has just released a tool that will let you do that. 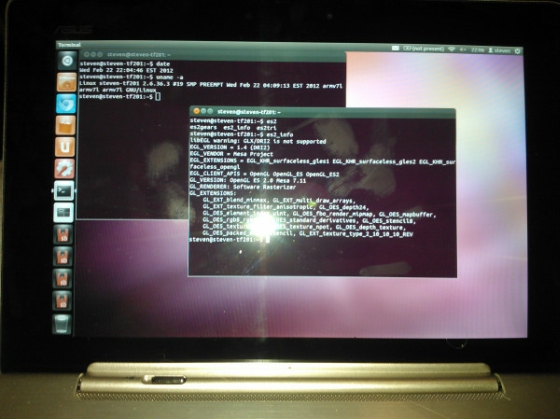 Asus doesn’t recommend unlocking the bootloader. You’ll void your warranty if you do so and Asus suggests you keep the bootloader locked unless you know what you’re doing and are willing to take responsibility for your actions.

You may also lose access to some features such as high quality video playback from some streaming video providers.

But if you do unlock the bootloader, you can load custom firmware… such as Ubuntu Linux. A hacker who goes by the name littlesteve on Twitter has posted an image of Ubuntu running on the tablet — although not all the features are working yet. He has to use a Bluetooth mouse to navigate, for instance.

Now that it’s possible to unlock the bootloader, it’s likely that we’ll see additional software ported to the tablet.

In order to unlock the tablet you’ll need to have an Asus Eee Pad Transformer Prime TF201 with Google Android 4.0 Ice Cream Sandwich. The tool doesn’t work with Android 3.2 Honeycomb.