The developers of the CyanogenMod version of Android are now offering nightly builds of the latest software for the HP TouchPad tablet.

Every night a new version of Android 4.0 featuring the latest bug fixes and other improvements will be available for download from the CyanogenMod website — but it’s important to note that nightlies are experimental builds and each new release could introduce new bugs. 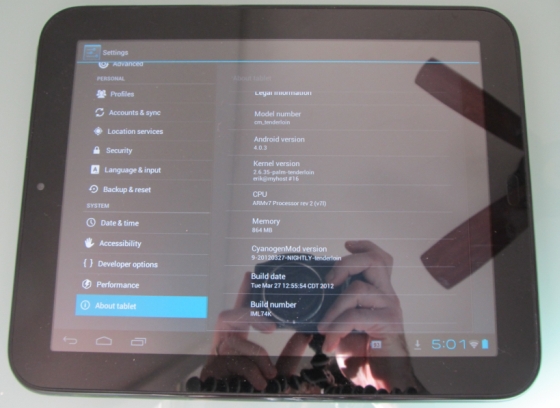 Originally HP shipped the tablet with the webOS operating system. But when HP discontinued the tablet and started selling it for as little as $99, thousands of people picked up the cheap tablet and a group of developers figured out how to install Android 2.3 and eventually Android 4.0 on the tablet.

But the Android 4.0 software is still rough around the edges. The camera and microphone don’t work, for instance, and many users have problems with WiFi connectivity.

Update 6/15/2012: There’s a patch that allows the mic to work, and it may be incorporated into future nightly releases.

Last month a developer started offering unofficial nightly builds of CyanogenMod 9 for the HP TouchPad. They took the latest version of Android 4.0 developed by members of the CyanogenMod team and incorporated the latest updates from the main branch of CyangoenMod 9 — which is also still in alpha.

Now there are official nightly builds available. It’s not clear whether these will eventually include fixes for the broken mic, camera, or WiFi. But if you want to try the latest version of Android available for the tablet and don’t mind running into the occasional new bug, you can keep an eye on the CyanogenMod website for updates every day… or night.

You can also keep an eye on the official merge status  to see what updates are being added to CyanogenMod 9 each day.

If you’re running webOS on your HP TouchPad, you can follow our guide for installing CyanogenMod 9 to start using the latest nightlies. Just use the update.zip file from the CM9 nightly page instead of the latest alpha.

If you’re updating from an earlier version of CyanogenMod 9 or another version of Android you can download the latest update to your device and use ClockworkMod Recovery’s “install update from zip” option to update.