Research in Motion is finally offering an official keyboard/case combo for the BlackBerry PlayBook… more than a year after the tablet first hit the streets. But that’s not even the strangest thing about the new BlackBerry Mini Keyboard. RIM also wants to charge $119.99 for the accessory — even though you can buy a BlackBerry tablet for just $199. 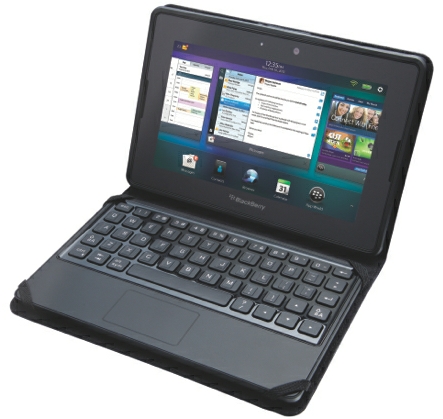 As tablet accessories go, the keyboard case looks decent enough. It has a built-in battery designed to last for up to 30 days. You can charge the keyboard using a standard PlayBook charger.

When you’re using the keyboard, you also save screen real estate, since the on-screen keyboard won’t pop up. There’s also a multi-touch trackpad below the keyboard.

If the keyboard case weren’t about a year late and didn’t cost more than half as much as a PlayBook tablet, it might even be a nice accessory.

On the other hand, the PlayBook used to have a starting price of $499. If you bought one after it went on sale and you’re trying to figure out what to do with the extra $300 in your wallet, I suppose this is one way to eat into your savings.