About a year after launching a 4.3″ x 4.3″ computer board with an Intel Celeron J4105 quad-core processor, support for Windows or Linux, and an Arduino-compatible ARM Cortex-M0+ co-processor, Seeed Studio is now selling an updated model.

The new Odyssey X86J4125800 features a slightly faster Intel Celeron J4125 quad-core processor, but it’s otherwise largely the same as last year’s model, which is no longer in stock and unlikely to be restocked since its processor is scheduled to be discontinued this summer.

With a starting price of $218, the Odyssey X86J4125800 isn’t the cheapest single-board computer around. But it’s one of the more versatile options. 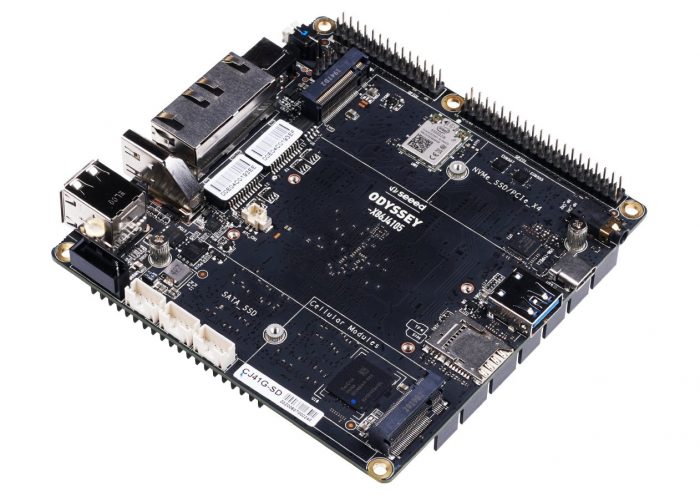 The little computer’s Intel Celeron J4125 processor is a 10-watt chip with a base CPU frequency of 2 GHz and support for burst speeds up to 2.7 GHz. It’s a 4-core, 4-thread processor (there’s no support for hyperthreading), and it features Intel UHD 600 graphics with base and burst speeds of 250 MHz and 750 MHz, respectively.

Intel says that should be good enough for driving up to three displays at once with resolutions as high as 4096 x 2160 pixels at 60 Hz.

The processor is soldered to the mainboard, as is 8GB of LPDDR4 memory. There’s also support for an optional 64GB eMMC storage module, but the system also features two M.2 2242/2280 slots that can be used to connect SSDs, cellular modems, or other hardware.

The system also has a Raspberry Pi-compatible 40-pin header and a 28-pin header connected to the SAMD21G18 ARM Cortex-M0+ co-processor board.

In case you needed any confirmation that the new model is basically a small upgrade over last year’s model, the photos on the Seeed Studio website show what appears to be an identical motherboard… including the Odyssey X86J4105800 name stamped on the board rather than the newer Odyssey X86J4125800 model number.