Hardkernel’s ODROID-N1 was supposed to be the company’s first single-board computer with a hexa-core processor. But after unveiling the N1 last February, the company eventually scrapped plans to bring it to market due to component supply issues.

Now the company has introduced a new model called the ODROID-N2, and it should go up for order next month and begin shipping in April. 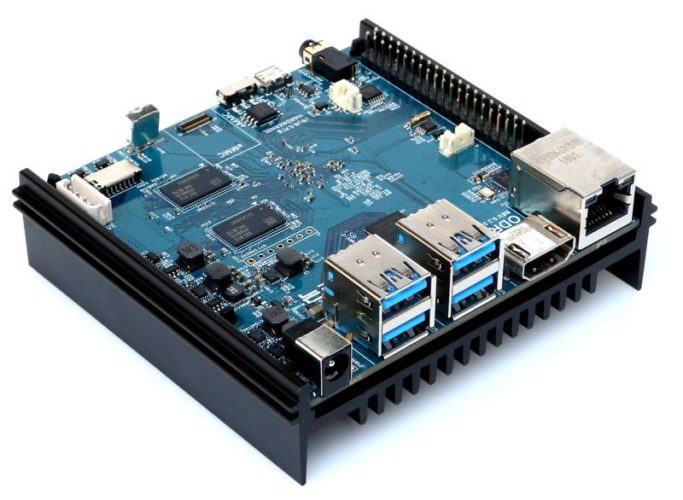 The system supports DDR4 RAM that runs at 1320 MHz and has a microSD card slot for storage as well as support for an optional eMMC module. Hardkernel says 8GB, 16GB, 32GB, 64GB, and 128GB modules are available.

Hardkernel will offer Android 9 Pie and Ubuntu 18.04 LTS software images, and the Ubuntu release does have some support hardware-accelerated video.

The processor is on the bottom of the board, while the ports are on top. This allows you to place a large metal heatsink underneath the board to keep things cool. There’s also optional support for a fan if you want an active cooling solution.

According to Hardkernel, the ODROID-N2 consumes about 1.8 watts while idle, about 5.5W under heavy load, and 0.2W while powered down.

7 replies on “ODROID-N2 single board computer coming soon for $63 and up (Amlogic S922X processor, up to 4GB RAM)”