A little over a year after launching a $63 single-board computer called the ODROID-N2, the folks at Hardkernel are giving the little PC a spec bump.

The new ODROID-N2+ has similar specs and the same starting price. But it has a newer version of the Amlogic S922X processor capable of hitting higher speeds.

While the original ODROID-N2 topped out at 1.8 GHz, the new version has a top speed of 2.2 GHz, for a 22-percent performance boost. 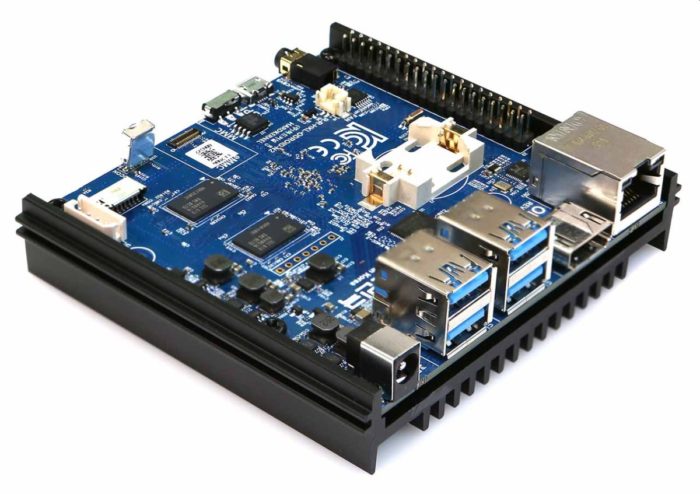 And that’s just the baseline. Hardkernel says when it was testing its first batch of 300 ODROID-N2+ boards, the company was able to overclock the systems to run at up to 2.4 GHz without any problems… although it doesn’t guarantee that this will be possible on all boards moving forward.

The company also suggests that you may need a cooling fan to prevent CPU throttling from kicking in and reducing speeds under heavy load if overclocked. So the company offers an optional $4 fan for folks that want one. But you should be able to use the little computer as a fanless PC when sticking to 2.2 GHz thanks to a metal heatsink.

Speaking of the heatsink, it’s a little smaller than last year’s model, making the ODROID-N2+ about 29mm tall (down from a height of 34mm).

Here’s a run-down of the ODROID-N2+ specs:

The little computer supports Linux and Android, and Hardkernel offers system images based on Ubuntu 20.04 or Android 9 Pie.

There are also a number of third-party images available for the ODROID-N2 and N2+ including Debian, Manjarao, Arch, CoreELEC, and more.

Hardkernel’s ODROID-N2+ is available for purchase in two different configurations:

via CNX Software and ODROID Forum