When the Raspberry Pi team launched a tiny, low power computer priced at just $35, it was pretty remarkable. But that was 2 years ago, and while the Raspberry Pi has seen a few updates in that time, it’s still powered by the same single-core 700 MHz Broadcomm BCM2835 ARM11 processor.

Over the past few years a number of other single-board computers with more powerful hardware have appeared, but they usually also have higher price tags.

Hardkernel’s ODROID-C1 doesn’t though… it’s a quad-core mini computer that sells for just $35. 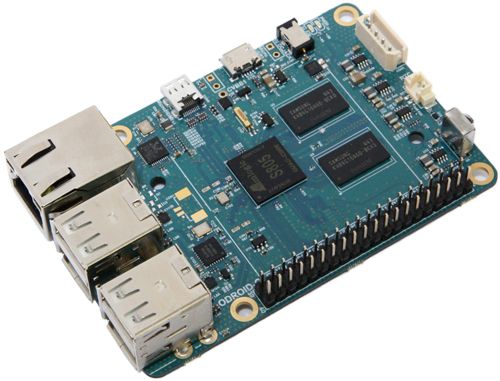 It has ARM Mali-450 MP2 graphics, 1GB of RAM, Gigabit Ethernet,3 USB 2.0 ports, a micro USB port, a micro HDMI port, an infrared receiver, and support for a microSD card and eMMC 4.5 flash storage as well as 40 GPIO pins.

The system doesn’t come with any storage, so you’ll need to provide your own. And if you want WiFi or Bluetooth you’ll need to connect a USB dongle. But both of those things are also true of the Raspberry Pi.

One area where the Raspberry Pi still wins is community support: by essentially selling the same hardware for 2 years (not to mention being one of the first to launch a product in this space), the Rapsberry Pi Foundation has fostered a community of independent developers who have built custom operating systems and other software designed to run on the Raspberry Pi.

The ODroid-C1 measures about 3.35″ x 2.2″ and weighs about 1.4 ounces, making it nearly the same size as a Raspberry Pi, but it offers significantly faster CPU performance.

Interestingly, this isn’t the first time Hardkernel has taken aim at the Raspberry Pi: this summer the company introduced the ODROID-W, which was powered by the same Broadcomm processor, but that product was quickly discontinued due to the lack of availability of that chip.

Still, the ODroid team has put together a video showing the ODROID-C1 running Ubuntu 14.04 with support for OpenGL ES 2.0 graphics, and it looks pretty speedy for a $35 computer. It can handle XBMC, the Chromium web browser, and other basic computing tasks.