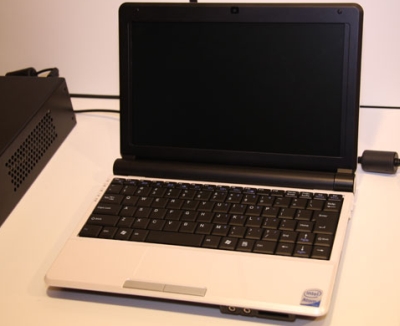 OCZ’s Neutrino netbook is designed to be easily upgraded. The current model ships with an Intel Atom N270 CPU, 10.1 inch, 1024 x 600 pixel display, 802.11b/g/ WiFi, 2 USB ports, and a 4 cell battery. But you select whatever hard drive, operating system, card reader, or RAM you want. One thing that’s difficult to add to a netbook like this, though, is a better graphics card. Now you don’t have to, because OCZ will soon release a version based on the NVIDIA ION platform.

Instead of an Intel Atom N270 CPU with integrated graphics, the new version will ship with a 1.6GHz Intel Atom 230 CPU (the kind usually used in desktops) and an NVIDIA graphics card (probably a GeForce 9400M GPU, which is what’s showing up in most ION based systems these days.

OCZ is also showing a nettop based on the NVIDIA ION platform, with support for up to 4GB of RAM, Windows Vista x64, a 120GB solid state disk, and an Intel Atom 230 CPU.