Facebook’s first standalone VR headset is now shipping. The Oculus Go is a $199 headset that doesn’t need to be tethered to a PC like an Oculus Rift, and which doesn’t rely on a phone for its display and processing power, like a Google Daydream View.

The company unveiled the Oculus Go last year, and speaking at the Facebook’s F8 developer conference today, CEO Mark Zuckerberg said the headset is now available an that it supports 1,000 apps, games, and experiences on day one. 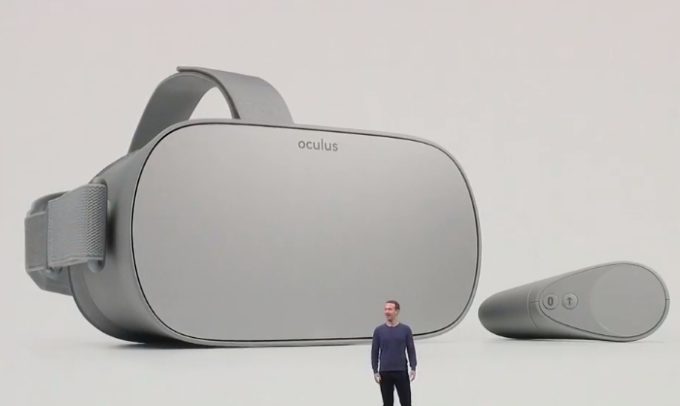 The system also comes with a controller that features trigger, home, and back buttons and a touch-sensitive area that you can use to navigate.

According to The Verge, using the Oculus Go feels a lot like using a Samsung Gear VR (which Samsung and Facebook/Oculus worked together on), and even runs the same apps and games. But there’s one key difference: you don’t need a phone to use it.

Not bad for a $200 device, which is only about twice the price of a Samsung Gear VR.

Facebook also announced it’s working on a new Oculus TV service that will provide video content from partners including Hulu, Showtime, and ESPN.

On the down side, this is distinctly smartphone-class hardware. You’re not going to be able to use the same apps or games that run on a high-end, PC-based headset like the Oculus Rift or HTC Vive. And you only get around 2-3 hours of battery life.

The Oculus Go is the sort of device that lowers the barrier for entry to virtual reality. Whether it provides the sort of experience that you’ll want to return to once the battery dies the first time remains to be seen.