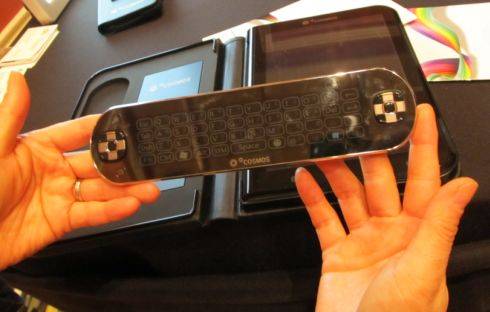 Korean company Ocosmos has a line of Windows tablets and handheld computers aimed at the portable gaming market. Ocosmos first started showing off its tablets at the Consumer Electronics Show in January, but since they’re built around Intel’s Oak Trail platform they weren’t ready for release until Intel officially launched that platform — which the chip maker did this summer.

Now it looks like the first Ocosmos tablet is available in Korea and it could ship internationally soon.

When we first saw the Ocosmos OCS9 at CES it had a 9 inch display — which helped explain the name. But several Korean sites are reporting that the device now has a 10.1 inch capacitive touchscreen display. You know, just like virtually every other tablet hitting the streets this year.

The OCS9 has a 1.5 GHz Intel Atom Z670 Oak Trail processor, 2GB of memory, and a 32GB or 64GB solid state disk. There’s a 1.3MP front-facing camera, a 5MP rear camera, and a 6-axis gyroscopic sensor. The tablet has WiFi baked in, but if you want 3G or 4G wireless data you’ll need an external dongle. The computer runs Windows 7.

Earlier this year Ocosmos was showing off a wireless keyboard and gamepad that could be used with the tablet. There’s no word on whether that accessory still exists.

While the OCS9 looks like a decent little tablet, I’m much more interested in the OCS1 — a 5 inch Windows tablet aimed at gamers with game controllers either built into the sides or available as part of a separate accessory that can be attached to the handheld. There’s no word on a launch date for that model.