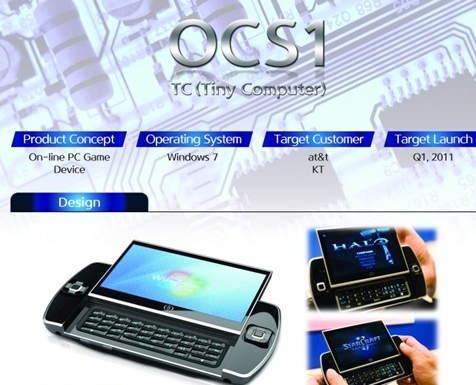 A few months ago a Korean company introduced a handheld computer called the Ocosmos OCS-1. At the time we learned that the little machine would be powered by an Intel Atom Oak Trail chip, GMA 600 graphics, and a 32GB solid state disk. Now the complete spec list is available, and it looks like the machine may be coming to the US as well as Korea.

According to the spec sheet obtained by UMPC Portal, the OCS-1 is aimed at AT&T in the US and KT in Korea, and could launch in the first quarter of 2011.

The computer looks like a phone or a handheld gaming system, with direction-pad buttons on the sides, and a slide-up screen that reveals a QWERTY keyboard underneat.

There’s a gyroscope and proximity and light sensors.

Chippy seems a bit skeptical of the company’s promise that the OCS1 will be a good mobile gaming machine, since the CPU is fairly slow and there’s no disc drive for playing disc-based games. But the thing still looks pretty cool and could be great for downloaded games or online casual games.