It’s basically a compact desktop with a wedge-shaped design, a 6 inch touchscreen on top, and an Intel Atom Cherry Trail processor.

The Ockel Sirius A looks a lot like the Gole1 mini PC I reviewed this summer. But Ockel’s model has a faster processor, a bigger and higher-resolution display, and faster WiFi, among other things. It also costs a lot more. 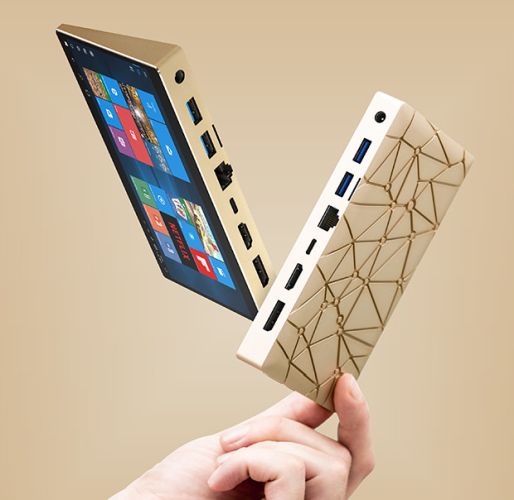 You can still pick up a Gole1 for as little as $149. But to get an Ockel Sirius B you’ll need to make a pledge of $549 or more to the company’s crowdfunding campaign. The device isn’t expected to ship until May, 2017. And the full retail price is expected to be about $699.

So what do you get for all that extra money? A device that’s a little better than a $149 Gole1.

It has HDMI and DisplayPort, a USB Type-C port, two USB 3.0 ports, and an Ethernet jack and 3.5mm headset jack. There’s 802.11ac WiFi and Bluetooth 4.2, and the Sirius A has a microSDXC card for removable storage.

The Ockel Sirius A measures has an anodized aluminum case and comes in silver, grey, and gold color options. It measures 5.9″ x 3.3″ .78″ at its thickest point (and .24″ at its thinnest).

The computer also features a 3,000 mAh, 11 Wh battery that Ockel says should provide up to 4 hours of run time while playing videos.

The battery means you can use the little PC like an oddly-shaped tablet. Or you can unplug it from the monitor in your office, carry it into the living room, and plug it into a TV to watch videos on a bigger screen, all without rebooting the computer.

Since this system is fanless, it should also be silent whether you’re using it to play videos, surf the web, or perform any other actions.

Ockel says there’s also a “Switch Mode” that lets the computer automatically detect when an external display is connected. It’ll then bring up a virtual keyboard or mouse to let you interact with Windows apps on a big screen, no physical keyboard or mouse required.

Overall, it’s an interesting device that could be appealing to folks who like the idea of the Gole1, but wanted a model with better specs. But the price is nearly 4 times as high, while the specs are… a little better. With a suggested retail price of $699 or more, I would have expected a model with at least an Intel Core M or Celeron/Pentium Apollo Lake processor, rather than an Intel Atom chip.