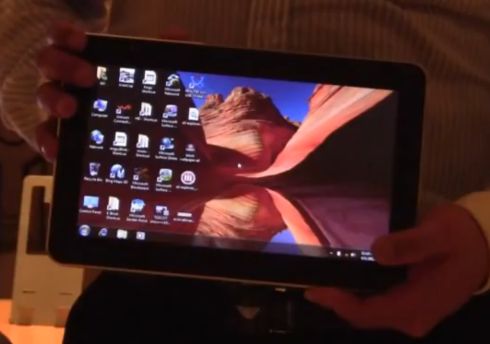 The tablet has a 1.5 GHz Intel Atom Z670 processor, a 10.1 inch display, 2GB of RAM and a 32GB solid state disk. But one of the most interesting items on the spec sheet is the battery life chart. With identical hardware, Evolve III says the Maestro S will run for:

UMPC Portal notes that this is likely because of the way the different operating systems take advantage of the power saving features in Intel’s Oak Trail platform. The chip is capable of disabling components that aren’t currently in use, providing something closer to the “always on” capabilities found in ARM chips by allowing devices to download notifications and other data from the internet while running in a very low power, almost sleep-like state.

Windows 7 isn’t optimized for this type of performance, but Android and MeeGo were both designed to run on smartphones and similar mobile devices.

You can check out a video of the Evolve III Maestro S in action from Computex after the break.

3 replies on “Oak Trail tablets could get longer battery life with Android, MeeGo”