New York City officials have announced a plan to turn nearly 7,000 old payphones in the city into WiFi hotspots. The goal is to provide city-wide WiFi to the public for free.

The LinkNYC program will be paid for by advertising on the side of the booths. 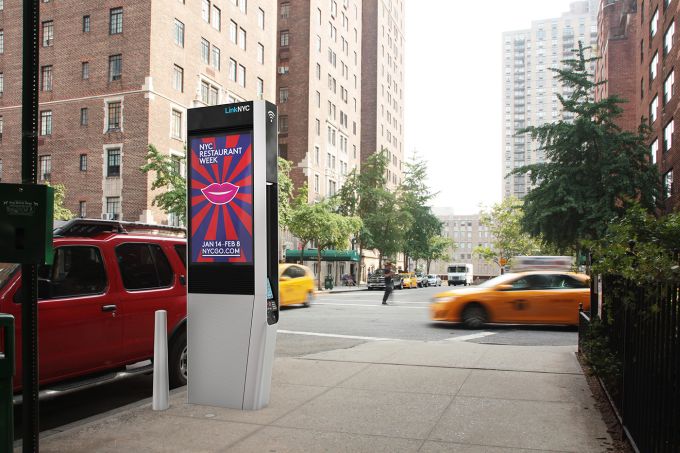 The goal is to have the first of the new Links up and running in 2015 with the eventual goal of blanketing all 5 boroughs of New York City with free wireless access points. Each old phone booth will become a WiFi hotspot capable of broadcasting a signal up to 150 feet away.

The booths will also have charging stations which you can use to power up your phone or other devices that use a USB cable, as well as a built-in Android tablet that’ll let you get directions, access city services, and more. The system also has a tactile keypad and braille lettering for accessibility.

You’ll also be able to make phone calls from any of the Links… but you won’t need a quarter. Phone calls to any US number will be free.

LinkNYC says it’ll offer Gigabyte-speed WiFi, allowing users to download a 2-hour movie in as little as 30 seconds… although I suspect speeds will vary depending on how many people are using the network at once.

Worried about connecting to a public WiFi network? LinkNYC says it will offer the first municipal WiFi service in the United States to use encrypted network connections.