This morning we learned that the $200 Shield TV Pro was coming soon, with a faster processor, support for Bluetooth 5.0 and Dolby Vision, and a new remote control.

But it looks like there’s a new non-Pro version as well. The new NVIDIA Shield TV has the same Tegra X1 processor and multi-function remote control. But it has a more compact design — the new model is basically a small cylinder that you can hide behind your TV. 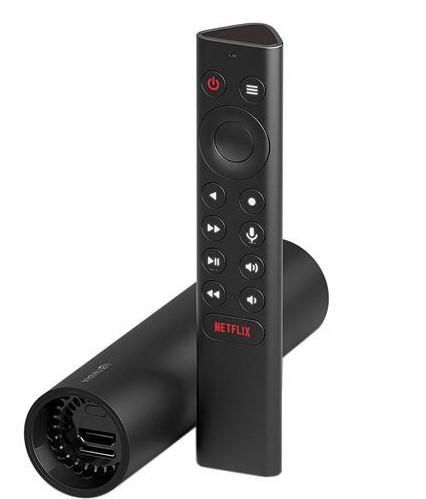 Measuring 6.5″ x 1.6″ the entry-level Shield is actually a little longer than the Shield TV Pro, which measures 6.3″ x 3.6″ x 1″, but it’s cylindrical design means it will take up a lot less space overall.

In fact, the new Shield TV is just a little larger than its remote control, which measures 6.1″ x 1.2″

That said, I’m not sure I’d call this a dongle the way some others have. It’s not designed to plug straight into an HDMI port the way a Chromecast or Fire TV Stick is, presumably because it’s just a bit too big for that.

The compact design does mean there’s not as much room for ports on this model as there has been on other NVIDIA Shield TV devices. So there are no USB ports at all — there’s an Ethernet port on one side, an HDMI port on the other, and a microSD card reader (something which the larger Shield TV Pro  doesn’t have, interestingly enough).

NVIDIA’s new entry-level Shield appeared briefly in a product listing at Newegg Canada. That page has been removed, but not before folks at Android Police, 9to5Google, and reddit saved some images.

The media streaming device is expected to sell for $199 CAD, which is about $150 in US dollars.