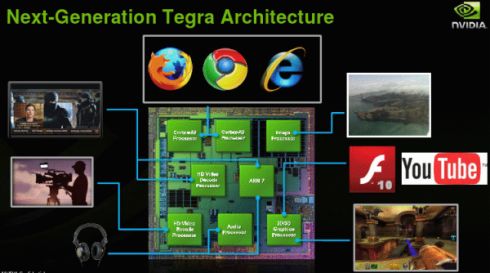 NVIDIA has announced the next next generation of its Tegra platform that bundles a low power ARM-based CPU with high performance NVIDIA graphics. The new version will consume less energy than Qualcomm’s Snapdragon chipset while providing 1080p HD video playback capabilities.

The processor is an ARM Cortex A9 chip that runs up to 1GHz. Tegra 2 will likely show up in devices with 5 to 10 inch touchscreen displays including smartbooks and tablets, and NVIDIA says we should start to see some announcements this week although it will likely be a few months before anything comes to market.

The company is primarily aiming this platform at touchscreen devices rather than netbooks with full keyboards because while Tegra can support Windows CE, Linux, Google Android, and Chrome, it can’t do Windows XP or 7, and NVIDIA figures if you give users something that looks like a laptop they’ll expect it to act like one — and for most users that means running Windows. Of course, this doesn’t explain the Mobinnova Beam with Tegra 2, because that device certainly looks like a netbook to me.

NVIDIA is also promising Tegra will power in-car systems which means your in-car next entertainment system could be able to handle HD video.