NVIDIA’s Tegra Note tablet is inching closer to reality. The tablet made a stop at the FCC website this week, complete with photos, a user manual, and a hint that the tablet might not actually be called the Tegra Note when it hits the streets.

While pictures of the actual prototype clearly say “Tegra Note” on the back, there’s a picture in the user manual that just has the word “BRAND” on it, suggesting that this could be a reference device from NVIDIA that’ll be re-branded and sold by different companies. 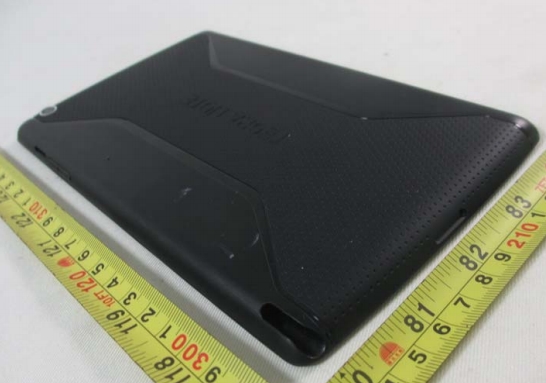 In other words, the Tegra Note P1640 might not be NVIDIA’s tablet version of the Sheild handheld game console. It might be the next generation of the company’s “Kai” platform for low-cost, Tegra-powered tablets like the original Asus/Google Nexus 7.

Either way, as expected the tablet appears to have a 7 inch display, Android Jelly Bean software, an NVIDIA Tegra 4 quad-core processor, and a digital pen which you can use to write, draw, or interact with the tablet using a special pen menu.

Photos show a 3200mAh battery and a 4100mAh battery. It’s not clear which one the tablet will have, or if both options will be available.

There’s still no word on how much this tablet will cost, when it will be available, or even what it’ll be called. But it certainly seems to have graduated from rumor status and made its way into upcoming device territory.

One reply on “NVIDIA Tegra Note hits the FCC: 7 inch screen, Tegra 4 chip, and a pen”