NVIDIA describes its next-generation mobile processor as a 192-core chip. But only 2 to 4 cores in an NVIDIA Tegra K1 chip are actually ARM CPU cores. Most of the cores NVIDIA is talking about deal with graphics processing, borrowing technology from the Kepler graphics architecture NVIDIA had already developer for desktop and laptop computers.

So it makes sense that in order to show what the Tegra K1 can do, NVIDIA put together a few graphics demos. 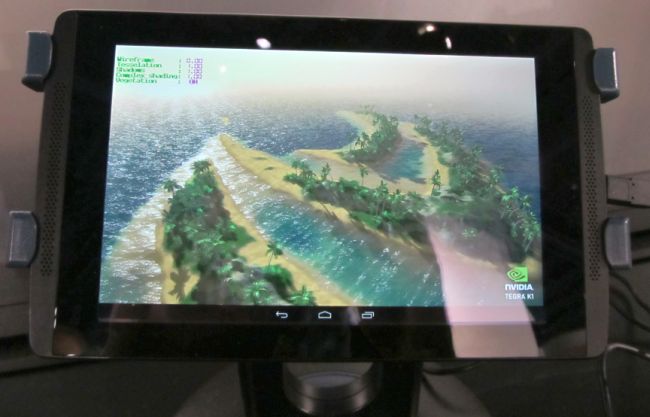 In technical terms, the Tegra K1 graphics chip can handle DirectX 11 and OpenGL graphics, and the developers at Epic Games are bringing the Unreal Engine to mobile with the help of the Tegra K1.

NVIDIA is working on two versions of the chip, one based on a 2.3 GHz quad-core ARM Cortex-A15 32-bit CPU and a second with a custom 2.5 GHz dual-core 64-bit CPU. They’ll both have 192 graphics cores with support for NVIDIA’s CUDA parallel processing platform. And they’ll both support 4K display resolutions.

The chips aren’t available in any consumer products yet, but NVIDIA showed some reference devices based on its Tegra Note 7 inch tablet designs at the Consumer Electronics Show, and loaded up a few graphics demonstrations including one that shows a face rendered in real-time as you move the camera angle and apply different effects, and another showing the level of detail you can get while looking at an island landscape surrounded by water on a sunny day.

The GPU handles a lot of the heavy lifting in these demos, determining how to deal with shadows, ripples, reflections, and other elements that make the scenes look more realistic than they would on a device with a less powerful graphics chip.

Since the demos are rendered in real-time, they give you an idea of the type of graphics we could see in next-gen games optimized for NVIDIA’s mobile chip.