NVIDIA’s upcoming Tegra K1 chips will be the first to bring the company’s notebook-class Kepler graphics to smartphones, tablets, and other mobile devices. NVIDIA Tegra K1 chips have 192 graphics cores paired with some of the fastest ARM-based processor cores available.

But what does that mean in terms of performance? A couple of early benchmarks help paint a picture. 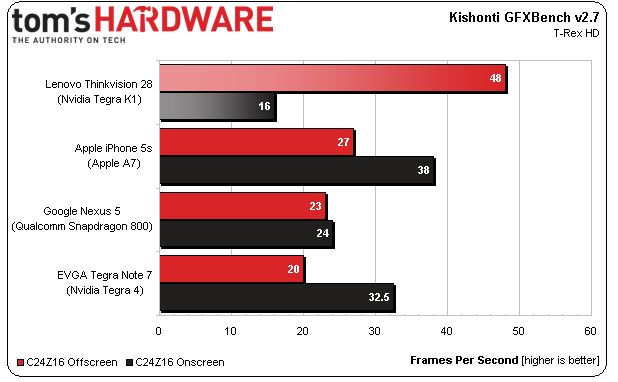 The folks at Tom’s Hardware and WCCF Tech ran a series of tests on some of the first prototypes with K1 chips found at the Consumer Electronics Show, including a new NVIDIA Tegra Note 7 prototype and Lenovo’s ThinkVision 28 smart display.

While these benchmarks aren’t always representative of real-world performance, in just about every test the devices with the Tegra K1 outperformed the Apple iPhone 5S with its Apple A7 chip as well as products with Qualcomm Snapdragon 800 and NVIDIA Tegra 4 chips.

In fact, WCCF Tech shows the K1 outpacing laptops with Intel Haswell processors and Intel HD 4200 or HD 4400 graphics in at least one test.

In other words — notebook-level graphics are on their way to devices with low-power, ARM-based chips. That could include mobile devices such as phones and tablets. And as the Lenovo ThinkVision 28 shows, it could also be a sign that ARM-based chips may be just about powerful enough for notebook and desktop devices.

On the other hand, that ThinkVision 28 also happens to have a high-resolution, 3840 x 2160 pixel display, and while the Tegra K1 chip scores top marks on “off-screen” benchmark tests which run at lower resolutions, it takes a lot of power to pump that many pixels, and frame rates and performance are less impressive when running at the display’s native resolution.

via Phone Arena and Engadget