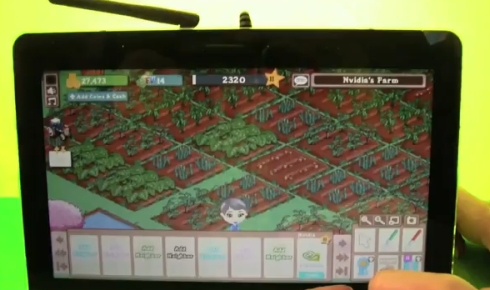 Google Android doesn’t currently support Adobe Flash, which means that a fair number of web sites look like they have blank boxes when you visit them in a browser on an Android-based tablet or smartphone. But Flash support is coming soon — and a number of tablets and other devices on display at Mobile World Congress in Spain this week are sporting a pre-release build of Flash for Android.

Sascha from Netbook News stumbled across one of those tablets at the NVIDIA booth. It appears to have a 9 or 10 inch touchscreen display and an NVIDIA Tegra 2-based chipset. Tegra 2 combines a low power ARM-based processor with NVIDIA graphics, which means you should be able to watch 1080p HD video on this low power device. And since Flash Player 10.1 will feature hardware acceleration for the Tegra 2 platform, it should even be able to handle 1080p HD Flash video.

But Flash isn’t just about games. In the video below, you can see Sascha checking out the Farmville Flash game on Facebook.

Say what you like about Apple’s stance that the iPad and iPhone don’t need to run Flash, that instead the web needs to move toward new standards like HTML5… but the truth is, right now there’s a ton of Flash content available. And adding Flash capabilities to a tablet like the NVIDIA demo featured in the interview makes it a heck of a lot more useful today. Or you know, whenever Flash Player 10.1 for Android is available.

Oh, and just in case you thought Flash 10.1 was just for Android or Tegra-based systems, it’s not. Lenovo points out that it’s working on adding Flash 10.1 support the company’s upcoming Skylight smartbook with a Qualcomm Snapdragon chipset and custom Linux operating system.