NVIDA’s Shield is a $300 handheld game console that looks like an Xbox controller with a 5 inch display tacked on. It can run pretty much any game designed for Android — but since most games are designed for touchscreens, a lot of those titles can be kind of tricky to play with a physical controller.

So NVIDIA is making it easier. The company has rolled out a software update that lets you map touchscreen actions to the controller buttons, making it easier to play games without reaching up to swipe the toucshcreen controller.

The software update also makes it a bit easier to use the Shield with a big-screen TV as if it were a living room console machine rather than a handheld gaming device. 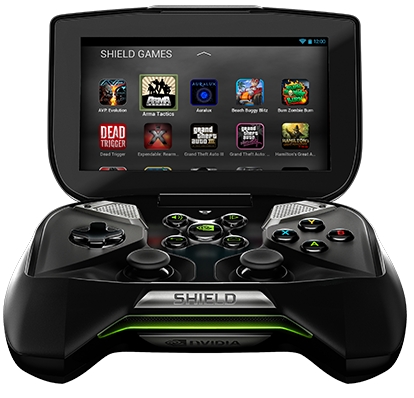 The new Console Mode lets you connect the Shield to a TV with an HDMI cable and then pair a Bluetooth controller so that you don’t need to hold the Shield in your hands while playing.

Console Mode also works with NVIDIA GameStream — which means if you have games installed on a PC with an NVIDIA graphics card in another room, you can use the Shield to play them on the big screen in your living room. Right now about 50 PC games are officially supported.

In other words, the Shield now lets you play Android or PC games on a small screen or a big screen, and it kind of tackles the Nintendo DS, Ouya, and Steam Machines all at the same time.

The software update also brings Android 4.3 Jelly Bean to the handheld device, bringing restricted user profiles, expanded notifications and other features — and if the 16GB of built-in storage isn’t enough for your gaming needs you can also now move both APK and OBB files to an SD card to free up storage space.