The tablet can handle thousands of Android games, including some which are optimized for the device’s Kepler graphics. You can also use it to stream PC games from your desktop over the internet, which means you can play many titles which wouldn’t otherwise be available on a handheld Android device.

Hook the tablet up to a TV with an HDMI cable and use the optional wireless game controller and you can also use the Shield Tablet as a game console for your living room. 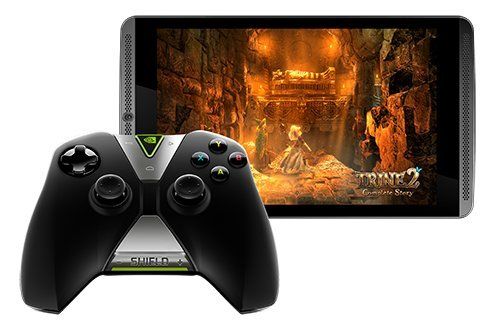 Early reviews of the tablet seem pretty positive. Sure, the Shield tablet is a bit more expensive than a Google Nexus 7 or Amazon Kindle Fire HDX 7. But it’s a full-fledged Android tablet that can do everything those devices do… and you can use it to play PC and Android games.

NVIDIA also includes a DirectStylus 2 digital pen which allows you to write, draw, or perform other actions that require precise, pressure-sensitive input.

Reviewers do consistently point out that while the tablet seems to offer reasonably long battery life during non-gaming tasks, you’ll probably only get around 4 hours of run time while doing serious gaming. That’s not bad compared to a decent gaming laptop, so hardcore gamers might be cool with that.

You can find more details in some of the first reviews at:

The NVIDIA Shield Tablet, Shield Wireless Controller, and cover are available from NVIDIA, Amazon, Best Buy, and other retailers.