NVIDIA’s new entry-level Shield TV console went on sale a few weeks ago for $200. But if you were holding out for the Pro model with more than 30x more built-in storage, now you can pick up the 2017 NVIDIA Shield Pro for $300.

The two boxes are virtually identical in most respects, but the Pro model has a 500GB hard drive and a microSD card reader, while the cheaper version has 16GB of flash storage and no microSD card support. 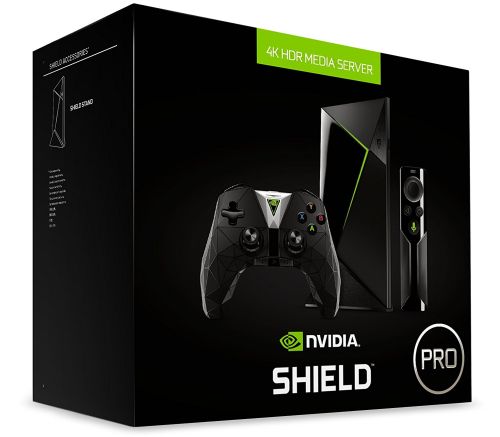 The 2017 model has the same NVIDIA Tegra X1 processor and 3GB of RAM as the Shield TV that NVIDIA first launched in 2015. But the newer models are 40 percent smaller.

Update: it’s been pointed out to me that the new NVIDIA Shield is 40 percent as smaller than the original, but the new 2017 Shield Pro is the same size as the older model.

The new version also comes with an updated game controller that features a microphone with optional support for an always-listening mode that will allow you to interact with Google Assistant via an upcoming software update.

If you already have an older Shield TV, you probably don’t need to buy a new model: a recent software update brought all the new goodies to the 2015 model. But if you want Google Assistant support, you may want to pick up one of the new controllers, which sell for $60 each.

The Shield TV runs software based on Google’s Android TV platform, features support for 4K/60fps video, and has HDMI 2.0b and two USB 3.0 ports as well as a Gigabit Ethernet port and support for 802.11ac WiFi and Bluetooth 4.1.