NVIDIA’s Shield handheld gaming console is expected to ship by the end of the month. The $349 device features a 5 inch, 720p display connected to an Xbox-style game controller. It runs Android, and it’s designed first and foremost to be a portable gaming system.

But you can also use it as a general-purpose Android device. The device will ship with Android Jelly Bean software and you can run nearly any app available from the Google Play Store on it… you just might not really want to. 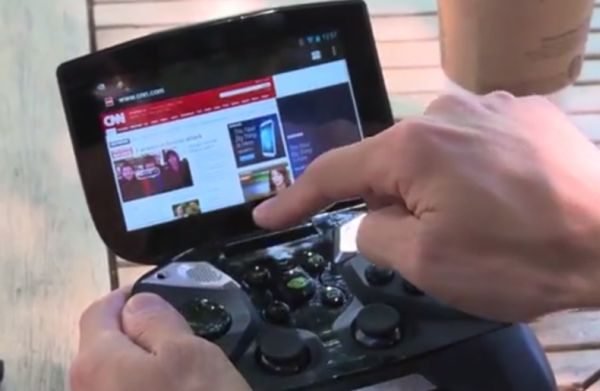 NVIDIA has posted a demo video showing how you can surf the web, check your email, view spreadsheets, and even read books on the Shield.

There are a few nice touches, like the ability to scroll through web pages using one of the game controller’s analog sticks, while using the other to move an on-screen cursor. But most Android apps were designed to be touched — and reaching up from the game controller to use the touchscreen looks all kinds of awkward.

You’ll notice, for instance, that the video doesn’t show how you would type on the Shield. That’s because the processor would involve trying to tap the button of the screen while it’s firmly attached to the top of the of the game controller. That’d be like trying to type on a laptop by gripping the edges of the keyboard and tapping your thumbs against the bottom of the screen.

Still, it’s nice to know that NVIDIA is at least thinking about ways people can use Shield when they’re not playing games.

The NVIDIA Shield is one of the first devices to feature an NVIDIA Tegra 4 ARM Cortex-A15 quad-core processor. It has 2GB of RAM, 16GB of storage, stereo speakers, WiFi, Bluetooth, and GPS and HDMI output.