NVIDIA’s next handheld gaming device could feature the company’s new Tegra K1 processor, 4GB of RAM, and a higher-resolution display.

The company started selling the original NVIDIA Shield handheld game console in mid-2013. I features a Tegra 4 processor, a 5 inch touchscreen display, and a built-in game controller that looks a bit like an Xbox controller.

Now the makers of the Antutu benchmarking utility have spotted details for a next-gen model which could feature NVIDIA’s latest hardware. 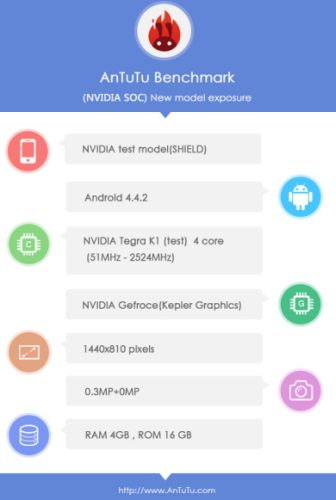 The device is referred to as an NVIDIA Test Model (SHIELD) and it features a a Tegra 4 quad-core processor with top speeds of about 2.5 GHz. It also has NVIDIA Kepler graphics, 4GB of RAM, and 16GB of built-in storage.

Other specs seem to include a front-facing VGA camera and a 1440 x 900 pixel display. While the screen might not seem that impressive at a time when we’re starting to see smartphones with 2560 x 1440 screens, at least it looks like the next-gen Shield will have a higher-resolution display than the original, which has a 1280 x 720 pixel display resolution.

18 replies on “NVIDIA Shield 2 game console could have Tegra K1, 4GB of RAM”