This week NVIDIA released an Android 5.1 update for the Shield Portable handheld game console. But that wasn’t the only system to get an update: the company also released Android 5.1 for the Tegra Note 7. 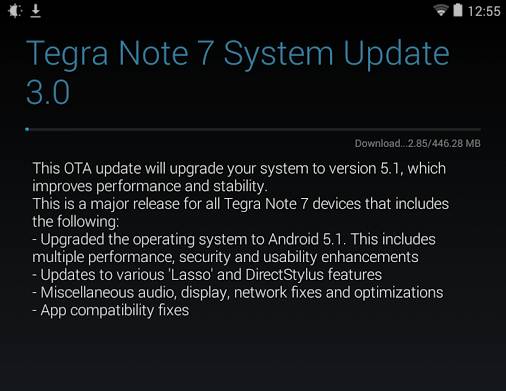 The Tegra Note 7 is a little different from NVIDIA’s other Android devices, since the company provided the designs, but partnered with third-party companies to actually produce the tablet.

So if you have a Tegra Note 7 tablet, it’s probably branded with the EVGA or Zotac names… or maybe it’s an HP Slate 7 Extreme (although that tablet is just different enough that you’ll probably need to wait and see if HP releases a software update. It won’t come straight from NVIDIA).

NVIDIA’s software update not only brings Android 5.1 to the aging tablet, but it also offers improvements for the DirectStylus digital pen that comes with the tablet, fixes some issues with app compatibility, and improves network, audio, and display issues.

Most retailers have stopped selling Tegra Note 7 tablets, but you can pick up a used model from eBay for around $130 and up.

For the most part though, the update is aimed at folks who already have a tablet… and it’s nice to see that NVIDIA continues to support some of its older products even while it pushes newer models like the Shield Tablet.

On the other hand, this particular update may be a little rough around the edges: some users are reporting battery life is much worse after the update,

3 replies on “NVIDIA releases Android 5.1 for the Tegra Note 7”