NVIDIA’s next-generation Tegra processor will be a quad-core ARM Cortex-A15 processor with 72 graphics cores. The company says the Tegra 4 will be the first quad-core chip based on ARM’s most powerful design, and at a press conference today the company showed off a couple of things that the new chip can do.

In a head-to-head comparison with the Google Nexus 10 (featuring a Samsung Exynos 5 dual-core ARM Cortex-A15 chip), an NVIDIA prototype was able to load web pages almost twice as quickly.

NVIDIA also took advantage of the graphics processing cores to dramatically improve HDR (high dynamic range) photography. Instead of snapping two photos one after the other and then putting them together (which can take up to 2 seconds), NVIDIA Tegra 4 features new technology that snaps 2 photos simultaneously and produces an HDR photo in 0.1 seconds.

If HDR is turned on, a Tegra 4 device will be able to snap HDR photos using any camera app. Because photos are taken so quickly, you can also now use a flash when taking an HDR photo. 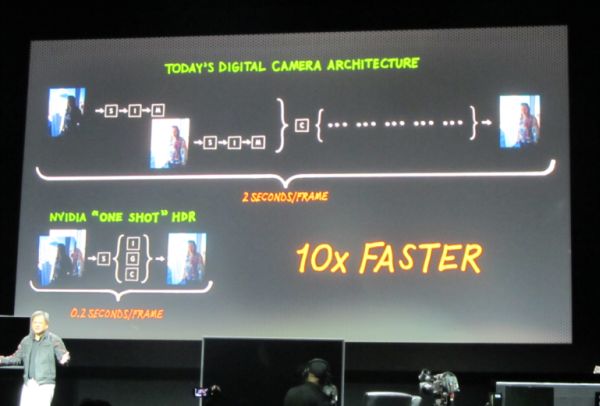 Tegra 4 will also be the first chip from NVIDIA which features an integrated 4G LTE radio. Previously the only way to get LTE on a phone or tablet with a Tegra chip was to use a separate wireless radio, based on the Icera technology the company recently acquired.