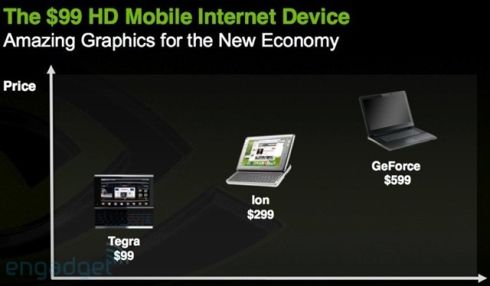 There’s been a lot of talk over the last few months about NVIDIA’s new ION platform that will bundle an NVIDIA GeForce 9400M GPU with an Intel Atom CPU to offer advanced graphics capabilities for netbooks. But ION isn’t the only thing NVIDIA’s got up its sleeve for low poer devices. Today at Mobile World Congress, the company announced that its Tegra could be used to build a $99 Mobile Internet Device (or MID) capable of playing HD video. The price tag? As low as $99.

At this point, the whole thing is still just in the concept phases. NVIDIA is showing a demo unit with the Tegra 600 chipset which is running Windows CE. But there’s no real product using the platform yet. But in theory, we could see mobile devices with fold out keyboards, HD video playback, WiFi and/or 3G access and 12-15 hours of battery life. But it’s still not clear whether NVIDIA’s $99 target price is standalone units or machines that would be subsidized by wireless carriers. Because while HD video is nice, I’m thinking it’s not much use unless you have a high resolution display, and that kind of screen alone could easily drive up the price of a portable computing device like this.