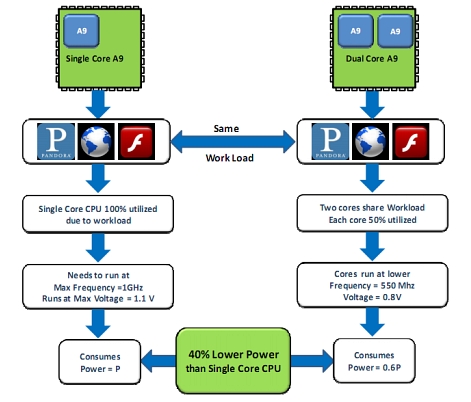 We’ve already heard from NVIDIA that Tegra 3 is almost done baking, and that work is already starting on Tegra 4. Now we’re starting to get a sense of what those future chips might look like. NVIDIA released a white paper (PDF link) this week touting the benefits of multi-core chips, concluding that dual core processors will be standard for mobile phones and tablets in 2011… and “quad-core is coming in the near future.”

Now, multi-core chips aren’t always more powerful than their single core cousins. In my recent tests, for instance, I’ve found that a single core 1.7GHz AMD Athlon K125 CPU can run circles around a dual core 1.5GHz Intel Atom N550 chip. But computer makers have found that by using multi-core chips they can improve performance without some of the drawbacks of using high power single core chips. For instance, you can keep the clock speed reasonably low and reduce power consumption and improve heat dissipation while enabling decent multitasking performance.

So while quad-core chips might seem like overkill for smartphones, they might offer a way to keep energy consumption low and prolong battery life while still providing more power than you can expect from today’s mobile devices.

via Android and Me