Specs for an unannounced NVIDIA device called the NVIDA Mocha showed up recently at the GFXBench website, although they have since been removed.

It’s not clear if the Mocha is a real tablet or some sort of internal prototype that NVIDIA is using for test purposes. But it has one heck of a spec sheet, and could give us an idea of what to expect from future NVIDIA-powered tablets. 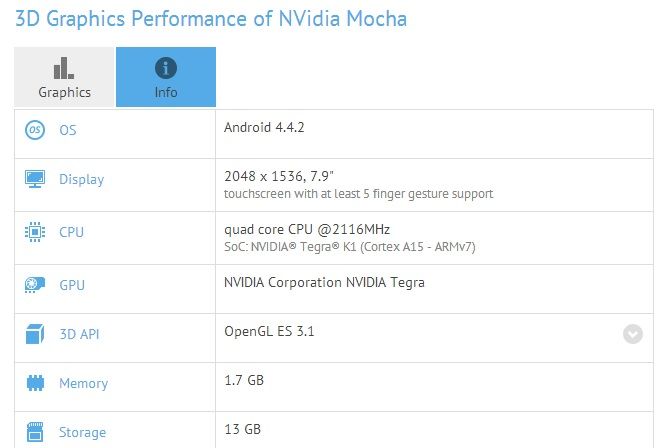 It has 2GB of RAM, 16GB of storage, a 7MP rear camera, and a 4.8MP front-facing camera. The tablet also features WiFi, Bluetooth, and GPS.

If the specs for the NVIDIA Mocha are real, it looks like we could see future Android devices from NVIDIA with higher-resolution screens thanks to the company’s new mobile chip 192-core graphics.

Of course, the Shield and Tegra Note could have shipped with higher-resolution displays. But then they also probably would have had higher price tags and less impressive graphics performance.