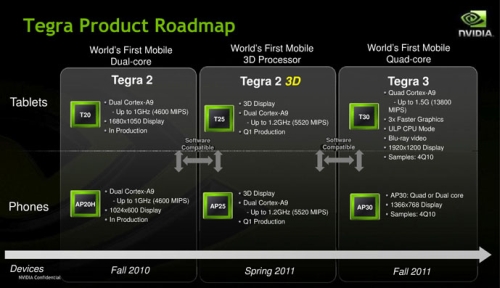 There was a time when ARM-based chips were viewed as the low powered wimps of the computing world. But that’s all changing. ARM-based chips today can be multi-core processors that can handle 1080p HD video playback, a decent bit of number crunching, and low power consumption. And things just keep getting better: a leaked product slide suggests that NVIDIA’s next ARM-based chip will be able to handle 3D graphics, while th efollowing chip will be a quad-core, low power beast.

NVIDIA’s Tegra 2 chipset is already grabbing a lot of headlines as one of the first 1GHz dual-core ARM chips around with support for high performance graphics. According to some leaked slides that popped up this weekend, NVIDIA could be preparing to release a Tegra 2 3D chip this spring, with dual Arm Cortex-A9 cores, support for 3D displays, and clock speeds up to 1.2 GHz.

By the end of the year, the slide suggests that Tegra 3 will be available for sampling. It will reportedly be a quad-core 1.5 GHz chip with support for 1920 x 1200 pixel displays, Blu-Ray video playback, and graphics that are 3 times faster than existing chips.

NVIDIA’s Tegra chips are designed for smartphones, tablets, and other mobile devices aimed at low power, high performance (for a mobile device) applications. For now, it’s likely that most ARM-based devices will continue to run mobile operating systems such as Google Android, iOS, webOS, or RIM’s BlackBerry QNX software. But eventually Microsoft plans to develop a full-blown version of Windows (not Windows CE) which can also run on ARM-based chips. You can already run some desktop Linux operating systems such as Ubuntu on ARM-based hardware, but while we’ve seen users install Ubuntu on the Tegra 2-based Toshiba AC100, I haven’t seen any major device makers announce an ARM netbook or tablet that will ship with Linux yet.

NVIDIA’s also not the only company working on multi-core ARM-based chips. Qualcomm’s dual-core Snapdragon processor is expected to start shipping soon, and Freescale plans to offer dual and quad-core chips this year.

2 replies on “NVIDIA may be working on 3D, quad-core Tegra chips”