NVIDIA’s latest graphics chips for laptops are designed to offer better performance, lower power consumption, and support for virtual reality, even on notebooks that weigh as little as 4 pounds.

For the first time, NVIDIA is also dropping the M (for mobile) from the names of its new cards. The NVIDIA GeForce GTX 1060, GTX 1070, and GTX 1080 solutions for laptops have the same names as the company’s desktop graphics cards.

The mobile versions will probably run a little slower in some situations, but if you’ve got a notebook designed to keep the graphics card from overheating, you should be able to get performance that’s pretty close to what you’d see from a desktop. 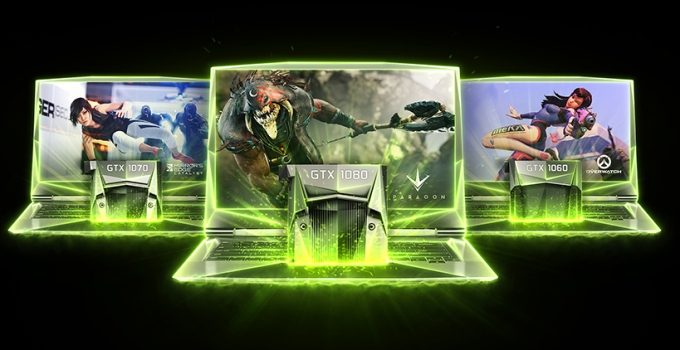 Like the latest NVIDIA GeForce 10-series desktop graphics cards, the new mobile variants are based on the company’s Pascal architecture. The new GPUs support NVIDIA’s G-Sync for laptops with display resolutions up to 2560 x 1440 and refresh rates up to 120 Hz.

The top-of-the-line GTX 1080 GPU for laptops features 2,560 CUDA cores, 8GB of GDDR5X memory, and a base clock speed of 1,556 MHz, which is just a little slower than the base speed of 1,607 MHz for the desktop version of the graphics processor. Both versions have the same 1.733 MHz boost clock speed.

Here are a few of the specs for the less powerful (and cheaper) GPUs:

Of course, these nearly desktop-class graphics solutions are going to be pretty power-hungry, so don’t expect stellar battery life if you’re using a relatively thin-and-light laptop. But some models feature big batteries, big screens, and, of course, power adapters for when you run out of juice after a few hours of gameplay.

A number of PC makers including MSI, Asus, Origin, and EVGA have already announced new laptops featuring NVIDIA’s latest GPUs, and some are already available for purchase or pre-order.