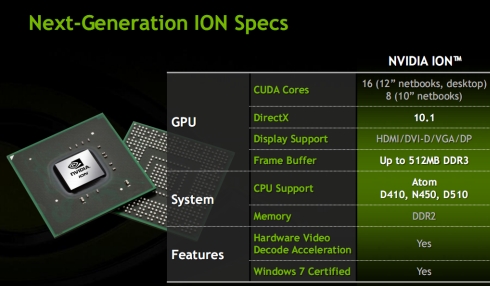 There are a few things that make the next-generation ION platform different from the chipset found in older computers such as the HP Mini 311 and Asus Eee PC 1201N.

Here’s the bullet point version, but you can find more details below

OK, now for some details. First, because Intel went and combined the CPU and GPU onto a single chip, NVIDIA couldn’t just take over the graphics and memory control functions anymore. Instead, the new ION processor is a separate video card, similar to a discrete graphics solution. The next-generation ION GPU will come on a PCI Express card that fits into mini-laptops with 10 or 12 inch screens. Yep, that’s one of the other differences, for the first time you’ll see 10 inch netbooks with ION graphics. This isn’t a huge surprise, since Acer already introduced the Aspire One 532g netbook with next-generation ION graphics.

Here’s what you might not have known, though. NVIDIA will offer two different versions of the new ION platform. The version that fits in 10 inch netbooks has 8 GPU cores, while the 12 inch model has 16. The result is that 10 inch netbooks with next-gen ION will perform about as well as laptops with first generation ION. Larger laptops, nettops, and all-in-one PCs with ION graphics will be much faster. NVIDIA says the 16 core version of ION scores about twice as high as first generation ION on benchmarks such as 3DMark06 and 3DMark Vantage. 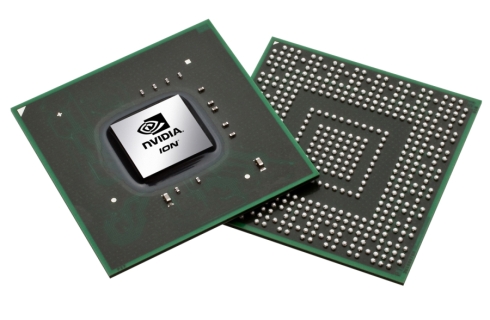 As expected, next-generation ION will also use NVIDIA’s new Optimus technology, which automatically switches between ION and integrated graphics without any user intervention required. If you’re using your PC to watch Flash or HD video, or play a game Optimus will turn on the ION graphics. For other tasks, you’ll be using the integrated GMA 3150 graphics offered by Intel. This helps prolong your battery life while giving you the graphics boost you need when you need it.

As a result, NVIDIA says you can have an ION + Pine Trail based system that will get 10+ hours of battery life. Strictly speaking this is true… but only if you never watch HD video or play games. That ION chipset will sap your battery life more quickly than the integrated graphics if you use it. But if you just plan on spending 10 hours surfing the web without visiting Flash-heavy sites, you should get the kind of stellar battery life we’ve come to expect from Pine Trail based laptops.

OK, enough of the good news. Here’s the less good news. While NVIDIA says the next-generation ION platform will support Windows 7 and Ubuntu Linux, the Optimus technology is Windows 7-only. So don’t expect automatic graphics switching if you decide to install Ubuntu or another Linux distribution on your netbook. 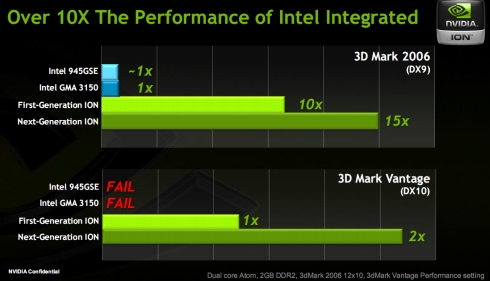 And while ION will now come on a PCIe card for netbooks, you will most likely not be able to pick up an ION graphics card and drop it into an empty PCIe slot on your existing netbook. NVIDIA does plan to offer ION PC cards direct to consumers, the plan is to only target desktop platforms for now. An NVIDIA product manager I spoke with suggested that some of the company’s hardware partners may decide to offer a drop-in solution for netbooks, but that’s not currently on the company’s radar.

On the bright side, today’s announcement clears up any confusion over that early benchmark that Netbook News reported last month. Sascha ran 3DMark03 on a pre-production Acer Aspire One 532g with next-generation ION graphics. It didn’t have the most up to date drivers, and it has the 8 core version of the processor, not the 16 core version, all of which helps explain why it wasn’t even as fast as first generation ION systems. We won’t know for certain how next-generation ION computers stack up until they get out into the real world and we start seeing independent tests. But NVIDIA is promising that we’ll see a major performance boost in the desktop and l

I know a number of people had been skeptical that a PCIe connection would be fast enough to support HDMI output, and NVIDIA says it was a challenge. But the company assures me that it works now. And this is probably one of the reasons you won’t be able to go out and purchase an ION card and drop it into your own system. Because how exactly are you going to add an HDMI port to a laptop that doesn’t already have one?

Systems with NVIDIA Ion graphics are going to come with Windows 7 Home Premium rather than Windows 7 Starter Edition. I suspect they’ll also typically come with more RAM and larger hard drives than computers with Windows 7 Starter and integrated graphics. So that means that while theoretically ION shouldn’t add too much to the base price of a netbook, I doubt we’ll see dirt cheap ION-based netbooks selling for $299 anytime soon. Memory, storage, and OS upgrades cost money, you know? But NVIDIA does say that computers with next-generation ION should be about the same price as current generation systems, which suggests to me that we’ll probably see laptops selling for between $400 and $700 with next-generation ION graphics.