NVIDIA is probably best known for making graphics cards used for gaming and video editing, but the company also designed low-power processors aimed at tablets, TV boxes, and other small gadgets a few years ago. Aside from the NVIDIA Shield Android TV box, there aren’t many devices using those chips anymore… but NVIDIA took what it learned and shifted its focus to building technology for things like self-driving cars and autonomous robots.

In 2015, the company launched the Jetson TK1 develpment kit with a system-on-a-module for robots, drones, and other autonomous machines. Two years later NVIDIA introduced the Jetson TK2 with twice the performance and a lower price tag.

Now NVIDIA is taking things to a whole new level with the new NVIDIA Jetson AGX Xavier, a 10 watt to 30 watt computer module that offers up to 32 trillion operations per second for deep learning and computer vision tasks. 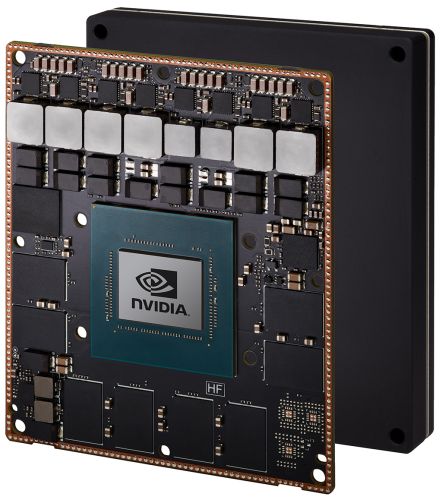 It’s the most expensive Jetson module to date, with volume pricing of $1,099 per unit with a minimum order of 1,000 units. But it’s also the company’s most powerful Jetson device so far.

NVIDIA says it offers up to 20 times the performance of the TX2, and up to 10 times the efficiency. 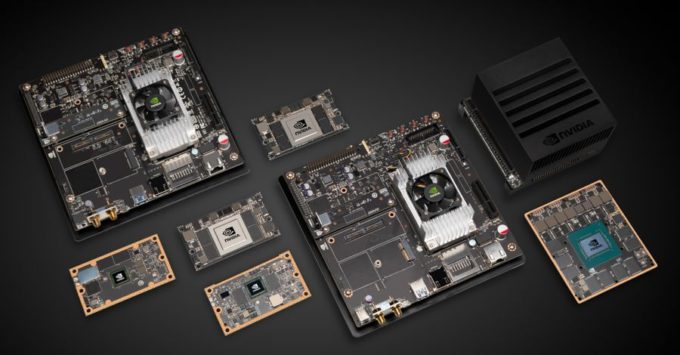 There’s also an optional $1299 Developer Kit bundle that includes the compute module, an open source carrier board and a power supply. The carrier board includes dual USB 3.1 Type-C ports, a Gigabit Ethernet jack, an M.2 slot for a wireless card and another for PCIe NVMe storage, an HDMI 2.0 port, a UFS card socket and a camera connector.

Don’t need all the new bells and whistles (or can’t afford the higher price tag)? NVIDIA will continue to offer the NVIDIA Jetson TX2 line of modules and the company is introducing a new lower cost version with 4GB of RAM instead of 8GB.