NVIDIA is introducing its next-generation graphics processing technology, and along with a new high-end GeForce GTX 680 graphics for desktop gaming, the company has a new mobile solution for ultrabooks and other notebooks. 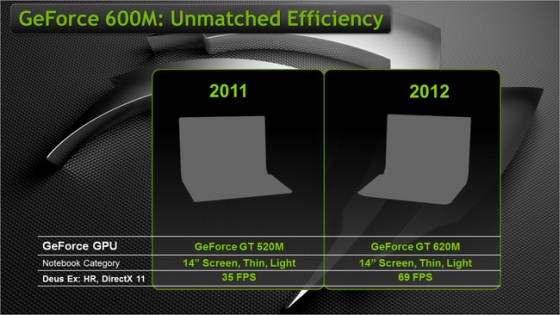 This isn’t a huge surprise. We already knew that the Acer M3 ultrabook would feature an NVIDIA GeForce GT640M graphics processor based on NVIDIA’s new 28nm Kepler architecture.

But it looks like that’s just the first notebook to feature NVIDIA’s new chip. The company is introducing a whole family of chips under the GT 600M name, and NVIDIA says we should expect ultrabooks and notebooks with Kepler chips from Acer, Asus, Dell, HP, Lenovo, LG, Samsung, Sony, and Toshiba this year.

When you don’t need the extra graphics capabilities provided by the NVIDIA chip, your computer will automatically use the Intel integrated graphics to save power. But when you’re playing games or performing other tasks that require extra 3D or HD video processing power, the Kepler chip kicks in.

NVIDIA says the new chips are twice as fast as the GeForce GT500M graphics processors for notebooks released in 2011, while using half as much power. That’s important for ultrabooks and other notebooks focused on both performance and long battery life — especially since most ultrabooks do not feature removable batteries.

While a discrete graphics chip makes it possible to play seriously detailed video games on the go, the 600M family isn’t only useful for gamers. Other apps that support hardware graphics acceleration including Photoshop for editing images and vReveal for processing videos can also run twice as fast on a device with NVIDIA graphics than one with Intel graphics alone.