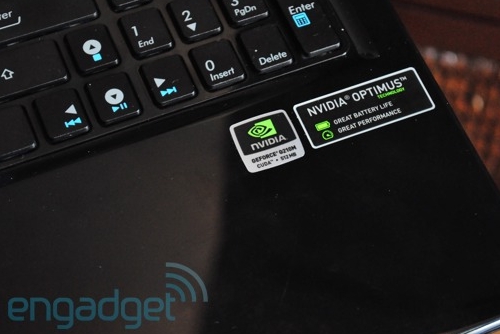 NVIDIA is introducing a new technology that allows computers with integrated and dedicated graphics cards to seamlessly switch between the two. If you’re surfing the web, you probably don’t need your high performance, energy-hungry NVIDIA graphics card to kick in and suck your laptop’s battery dry. But when you’re watching an HD movie, playing a game, or performing other actions that would benefit from a graphics boost, NVIDIA’s new technology will automatically switch to the higher performance graphics card.

NVIDIA calls the system Optimus, and it’s designed to work with GeForce 200M, 300M, and GeForce M GPUs as well as the as-yet-unannounced NVIDIA ION 2 graphics processor. It supports Intel’s Core 2 Duo, Core i3, i5, and i7 processors and Intel Atom N450 CPUs.

The move makes a lot of sense for a few reasons. First, since Intel’s latest processors integrated the graphics and CPU functions on a single chip, there’s no way for NVIDIA to simply replace the integrated graphics processors with its own chips. And second, on existing systems that have two GPUs, you have to toggle between them manually which takes time and sometimes requires you to close applications.

The Optimus system will let users manually switch graphics. But for day to day use, it will automatically determine which graphics solution meets your needs.

The first laptop equipped with the new Optimus technology is the Asus UL50VF, a 15.6 inch laptop with a 1.3GHz Intel Core 2 Duo SU7300 processor, Intel GMA 4500MHD graphics and NVIDIA GeForce G210M. Engadget’s Joanna Stern has been testing the laptop for a few days. She says it made the switch seamlessly when she wanted to watch HD YouTube or local videos. But the Optimus software didn’t recognize the video game she fired up during her test, which meant that the switch wasn’t automatic.

Gizmodo  reports that as many as 50 notebooks with Optimus should be available by this summer. Hopefully that list will include a few Atom-powered netbooks, or better yet, 11 or 12 inch notebooks with CULV processors and NVIDIA graphics.