Starting next month you may be able to buy a gaming laptop with one of two new mobile graphics solutions from NVIDIA.

The company says the first notebooks with NVIDIA GeForce RTX 3070 Ti graphics will be available starting February 1 for $1499 and up, while the new NVIDIA RTX 3080 Ti GPU will launch the same day in notebooks with starting prices around $2,499. 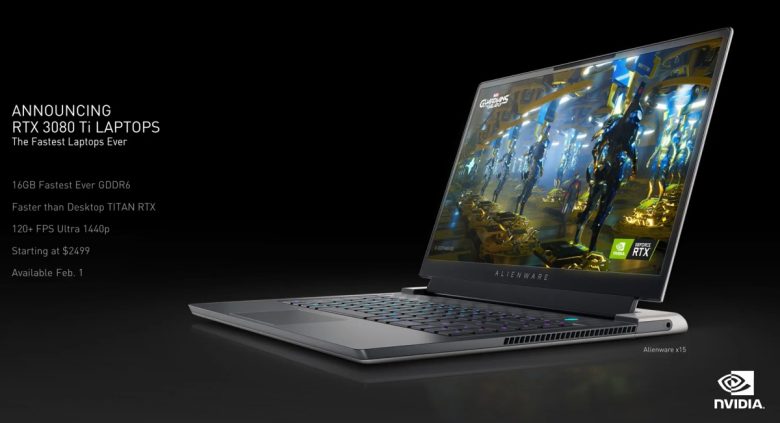 NVIDIA says the new RTX 3080 Ti mobile GPU is its fastest graphics processor for laptops to date, with 16GB of GDDR6 memory and support for gaming at 120 fps or higher at resolutions up to 1440p. The company says this GPU is faster than its desktop-class Titan RTX graphics cards.

Unsurprisingly the cheaper RTX 3070 Ti mobile GPU is a little less impressive, topping out at around 100 fps on a 1440p display, but NVIDIA says folks moving from a laptop with a previous-gen NVIDIA RTX 2070 Super GPU will see 1.7X better performance on laptops with the latest GPU.

NVIDIA is also updating its Max-Q technology which allows mobile GPUs to balance performance and efficiency for longer battery life. 4th-gen Max-Q technology includes a new CPU Booster feature that will allow the GPU to tap into your laptop’s CPU to adjust performance, power consumption, and thermals in order to give more breathing room to the GPU when needed.

There’s also support for disabling some GPU cores during overclocking thanks to a new Rapid Core Scaling feature, and Battery Boost 2.0 technology that will allow users to prioritize long battery life over high frame rates while gaming.