NVIDIA is launching its next-gen notebook graphics, and the company’s promising up to 60 percent better performance for gaming laptops. But what might be an even more important aspect of the NVIDIA GeForce 800M GPU family is NVIDIA’s new “Battery Boost” technology.

The company says it could offer gamers up to twice as much battery life while gaming on the go. 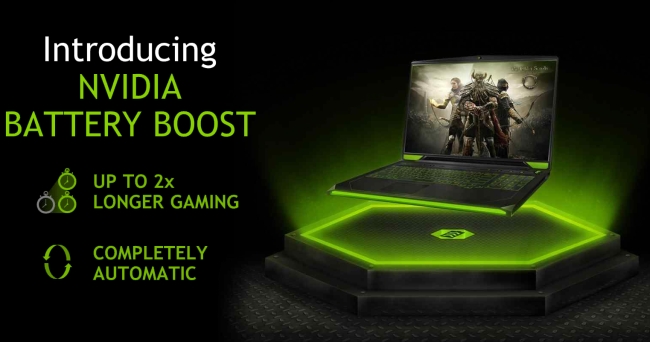 Among other things, Battery Boost will lower frame rate targets to 30 frames per second when you unplug your laptop to reduce GPU usage. But NVIDIA’s drivers also communicate with the CPU and other components of your laptop so that it’s not just the GPU that’s working less when Battery Boost is enabled.

All told, NVIDIA says this means a Core i7 laptop with a 70Whr battery that only got about 56 minutes of battery life playing Borderlands 2 with a GTX 760M graphics card can run for 1:40 with GTX 860M graphics and Battery Boost. 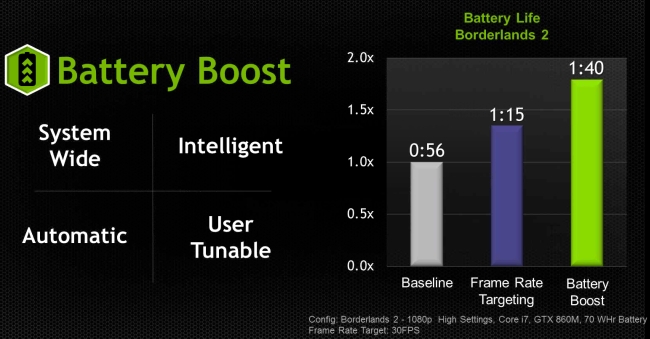 If those numbers seem low, you probably haven’t tried playing bleeding edge games on a laptop lately. While many Windows notebooks with Haswell chips can run for 8 hours or longer on a charge, gaming can tax the system and drain your power like nothing else. So any technology to boost battery life and let you play longer is welcome... even if it involves reducing graphics quality a bit when you unplug the laptop.

NVIDIA’s Battery Boost technology kicks in automatically though, so as soon as you plug in the power supply, it should shut off and let the CPU and GPU kick into high gear again.

Some of the first laptops to feature new 800M series graphics include thin and light models from Razer, Gigabyte, and Lenovo, as well as bigger laptops from Alienware, Asus, and MSI.

Since shoppers tend to replace laptops about once every 5 years, NVIDIA suggests that someone in the market for a new gaming notebook with a GTX 800M chip might be getting a machine that’s thinner, lighter, and faster than the one they’re replacing, as well as cheaper. 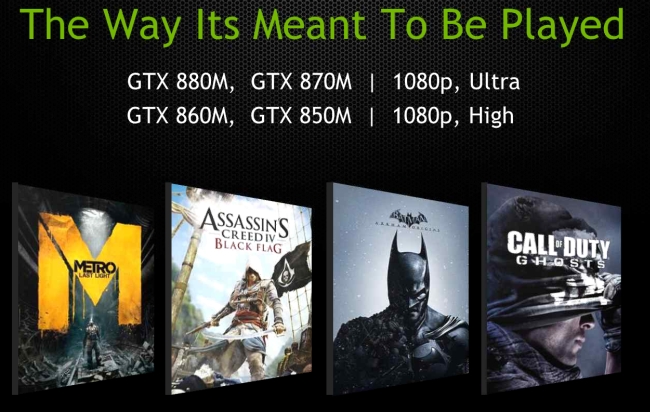 NVIDIA will offer a few different models of its 800M series graphics, including the 830M and 840M for lower-priced multimedia machines and the 850M, 860M, 870M and 880M for higher-performance gaming systems.

The company is also taking aim at Intel. While the chip maker has made serious improvements with its integrated graphics technology over the past few years, NVIDIA says many of the latest video games just aren’t playable with Intel HD graphics. 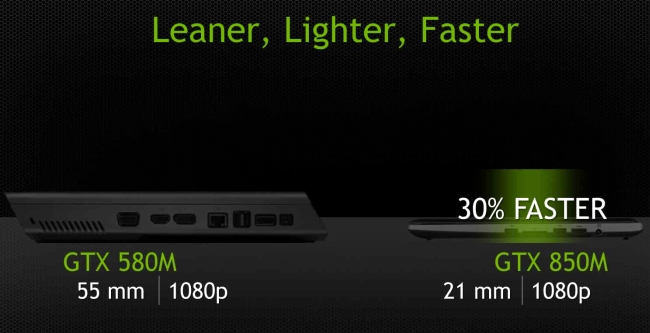 But in case you didn’t get the message that NVIDIA’s new technology can help lead to longer battery life in gaming systems, the company says its dedicated graphics chips are actually more efficient than Intel’s integrated graphics when it comes to high-end games.

For instance, NVIDIA suggests a laptop with Intel Core i7 graphics and Iris Pro graphics can use as much as 43W of power while playing Skyrim, while a system with the same Core i7 chip and NVIDIA 840 graphics uses 17W. 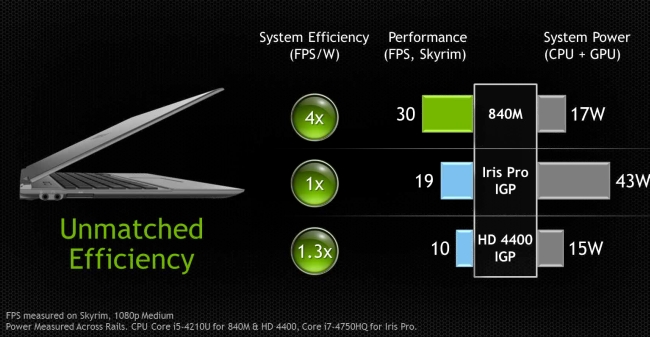