NVIDIA may be in the process of acquiring ARM and launching several new ARM-based processors for data centers and autonomous vehicles. But the company is also partnering with other chip makers to bring NVIDIA graphics to new places – including supercomputers, edge hardware, and personal computers featuring ARM-based processors.

From a consumer standpoint, one of the most interesting announcements is that NVIDIA and MediaTek are working together on a reference platform for computers with MediaTek’s ARM-based processors and NVIDIA graphics. 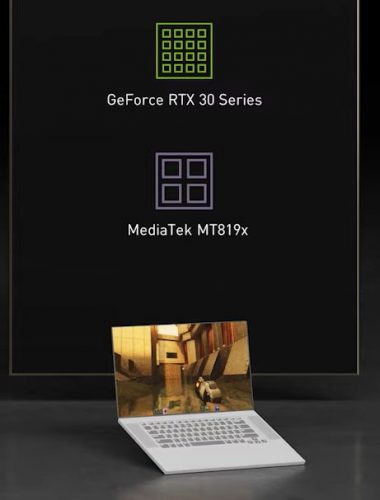 The two companies have announced a reference platform with support for Chromium, Linux, and NVIDIA software development kits that could lead to Chromebooks or other laptops featuring ARM-based processors and NVIDIA RTX 30 series graphics.

For now, that’s pretty much all we know about the partnership. But it’s interesting to note that NVIDIA mentions SDKs for Chromium and Linux but not Windows.

While Microsoft offers a version of Windows that runs on ARM processors, so far the only Windows on ARM PCs to ship have all featured Qualcomm Snapdragon processors. That could change soon – Samsung is said to be working on a Windows laptop featuring a Samsung Exynos processor. But so far there’s no indication that MediaTek-powered Windows PCs are on the way.

But MediaTek processors have proven popular in Chromebooks in recent years, and the company is a major player in the budget Android smartphone and tablet space.

Does anyone need a Chromebook with a discrete graphics card and support for ray tracing? Maybe not right now. But there are indications that Google plans to make Chrome OS into a serious platform for gaming in the future, so next-gen hardware with low-power, ARM-based processors and discrete graphics might actually make a lot of sense.

NVIDIA has also introduced six new NVIDIA Ampere GPUs for laptop and desktop computers that are designed for professional use rather than gaming. The company says its new NVIDIA RTX A4000 and A5000 graphics cards for desktop workstations feature up to 2X the performance of previous-gen graphics for AI and real-time rendering, while new RTX A2000, A3000, A4000, and A5000 GPUs are designed for laptops.