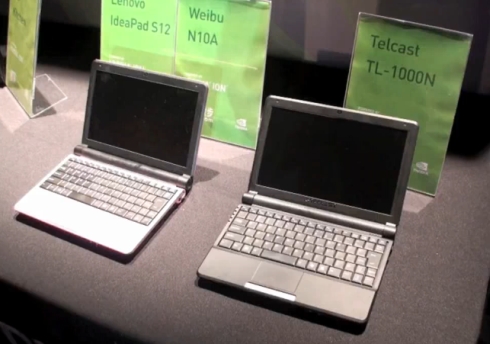 The NVIDIA ION platform bundles a low power Intel Atom processor with an NVIDIA graphics chip to offer higher quality graphics performance at a reasonably low price and with reasonably low power consumption. The Lenovo IdeaPad S12 laptop and Acer AspireRevo nettop are the only two brand name products announced to date that use the new platform. But today at Computex, NVIDIA demonstrated a number of ODM devices from companies you’ve probably never heard of like Telcast and Weibu.

In other words, you probably won’t see any netbooks with these brand names on them anytime soon. Instead, these companies may end up manufacturing laptops using the NVIDIA ION platform for bigger name companies that you have heard of. Just in case you had any doubts that these companies were small time though, one of the computers in the pictures I’ve seen has a logo that says Teclast on the display, but sits in front of a placard that says Telcast. Honestly, I have no idea what the company’s real name is.

You can check out a short video of the Lenovo, Weibu, and Telcast(?) laptops after the break.

On the Nettop side of things, there was a bit more variety. Crave snapped some photos of a number of small, low power desktop computers at the NVIDIA event including the MSI Wind Box D200 and a Mouse Computer nettop, both with built in optical disc drives. The Funtwist FION 330 had a dual core Intel Atom 330 processor. There were also machines from Colorful, ASRock, Pegatron, and Foxconn.

In related news, DigiTimes reports that the Asus Eee Box EB1006 we first heard about the other day might use the ION platform,