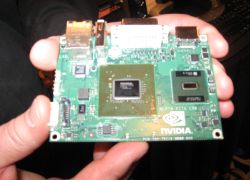 There’s no question that cheap, low power computers (and computer chips) are selling like hotcakes. And while the profit margins on these devices are certainly lower than the margins on high end gaming rigs, computer makers have to be happy that anything is selling well during the recession. Well, maybe not happy exactly.

Graphics chip maker NVIDIA doesn’t really do low end. And the company’s CEO says the low end is growing. He doesn’t expect Intel Atom powered computers to take market share away from expensive computers with quad core processors. But he does suspect that cheap, low power laptopscould eat into sales of  mid-range computers, (the kind that might have a dual core processor and decent graphics card and sell for around $800 dollars).

All of this isn’t necessarily a bad thing for consumers. For years, we’ve been encouraged to buy the latest and greatest technology, and that’s always meant more power and a higher price tag. But if you want to use a computer for surfing the web, watching videos, and editing office documents, you might not need a quad core processor. Of course, companies like NVIDIA and Intel make most of their money on higher end chips, and if sales of those devices slump it could hurt the companies that are pumping out the components that make low cost computers possible. Maybe we’ll more ARM-powered netbooks in the future?

Anyway, NVIDIA is trying to carve a niche for itself in the low power computing space. The company’s ION platform is designed to bring vastly improved graphics performance to the Intel Atom processor. No netbook makers have announced plans to use the ION platform in a device yet, but if the price is right, I could see this being one way that companies can justify charging a few extra bucks for their mini-laptops.