Chromebooks and Linux laptops with ARM-based processors and NVIDIA RTX graphics could be on the horizon. NVIDIA has released a demonstration showing PC games running on computer with a MediaTek Kompanio 1200 (MT8195) processor, NVIDIA RTX 3060 graphics.

While PC makers haven’t announce plans to release hardware with those features yet, NVIDIA’s demo presents some of the strongest evidence to date that Chromebooks (and maybe other laptops) with ARM chips and discrete graphics are in the works. 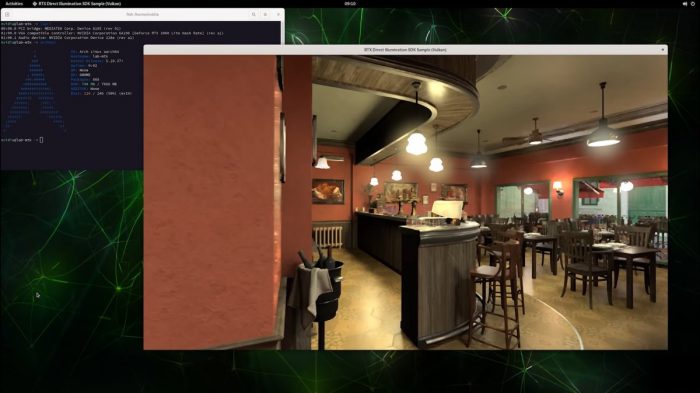 The move shouldn’t come as a huge surprise – after all, NVIDIA has a long history of merging its graphics with ARM-based processors. The NVIDIA Shield TV is one of the most powerful Android TV devices to date thanks to its NVIDIA Tegra processor and graphics. And the Nintendo Switch handheld game console is powered by a similar chip.

And now that NVIDIA is trying to buy ARM for $40 billion it makes sense for the company to branch and show that its graphics technology can be paired with ARM-based processors made by other companies.

For this demo, NVIDIA showed showed Wolfenstein: Young Blood and The Bistro taking advantage of the discrete GPU for things like real-time ray-tracing for lighting effects and DLSS for AI-accelerated performance and visuals.

But one of the interesting things about this sample computer is that it wasn’t running Windows. Instead, it was using Arch Linux. In fact, NVIDIA’s press release makes no mention at all of Windows, and instead highlights the fact that it’s releasing new software development kits for ARM and Linux.

It’s already possible to run Linux applications on most recent Chromebooks, and Google has been working to bring Valve’s Steam game client to Chrome OS, allowing users to play PC games on Chromebooks. While some of those Chroime OS laptops will likely have Intel or AMD chips and/or discrete graphics, NVIDIA’s latest demo and upcoming SDKs will make ARM+NVIDIA Chromebooks viable gaming machines as well.

Of course, it’s possible that NVIDIA could also foresee Linux as a viable platform in its own right. While only a small portion of PC gamers are using Linux at the moment, the upcoming Valve Steam Deck could change things.

Valve’s handheld gaming computer has an AMD processor with AMD graphics, but it ships with the Arch Linux-based Steam OS as its operating system. That could further push the Linux gaming ecosystem.

At the moment many Windows PC games that use anti-cheat software still aren’t compatible with Linux, even with Proton. But that’s something Valve is working on and hopes to have resolved by the time the Steam Deck begins shipping in December.

And that could make Linux a more viable gaming platform for everyone, not just folks who buy Valve’s new $399 handheld gaming PC.