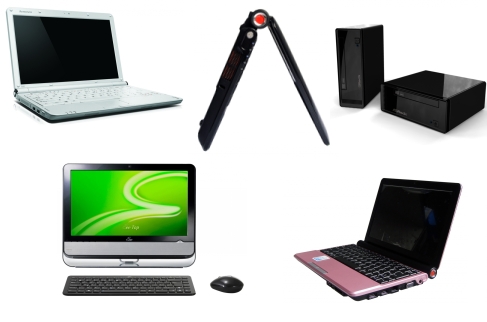 If you’ve been wondering where all the computers based on NVIDIA’s ION platform were, the answer appears to be Taipei. Because at a Computex press event today, NVIDIA announced 21 different netbooks and nettops that would make use of the new platform which bundles an Intel Atom processor with an NVIDIA GPU to offer enhanced graphics performance.

NVIDIA also unveiled 12 machines using the Tegra processor, which basically does the same thing, but with an ARM based CPU instead of an Intel Atom chip.

The list of ION and Tegra machines includes a few pleasant surprises. For instance, the Asus Ee e Top ET2002 all-in-one PC will pack an NVIDIA GPU, which should give the machine better graphics performance than you’ll get from the company’s current Eee Top ET1602. ECS is also showing off a rather crazy looking nettop that’s packed entirely into a small vase. That’s right, it’s a vase with an Intel Atom 230 CPU, 1GB of RAM, a 2.5 inch hard drive, and even a Blu-Ray disc drive.

The 12 Tegra based machines include the Mobinnova élan, as well as several other netbook and tablet style devices from Pegatron, Wistron, Inventec, and Compal. If those names don’t sound familiar, that’s because they’re primarily ODM companies that produce computers for bigger name companies that you have heard of. If all goes according to plan, you’ll start seeing Tegra powered machines built by these companies but rebranded and sold by telecoms for around $200 or less by the end of the year.

You can find a list of all 21 ION based netbooks as well as some of the Tegra powered devices after the break.

Update: Digitimes reports that HP and Dell will also launch netbooks and all-in-one PCs based on the NVIDIA ION latform during the third quarter of 2009.