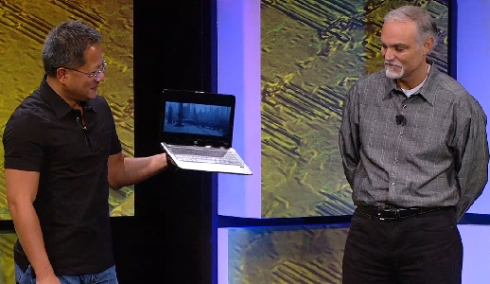 Just in case you had any doubt that NVIDIA and Adobe were preparing to announce a new version of Adobe Flash with GPU acceleration soon, representatives from the two companies showed off an HP Mini 311 laptop with NVIDIA ION graphics playing HD Flash video at the NVIDIA GPU conference in San Jose yesterday. You can check it out for yourself by watching the 1:00PM webcast on this page.You’ll have to scroll to near the end to find the clip, but it’s there.

What you’re looking at is a laptop with an 11.6 inch, 1366 x 768 pixel display, a 1.6GHz Intel Atom N270 CPU, and an NVIDIA GeForce 9400M graphics processor. Today, that device shouldn’t be able to play HD Flash video without stuttering. Not even high quality content from YouTube or Hulu plays smoothly on devices with those specs. But Adobe is expected to push out an updated version of Flash Player that will take advantage of the high performance GPU to take the load off of the low power CPU in NVIDIA ION powered netbooks.

A few days ago, German site Notebook Journal posted a similar video, but it’s been removed. From what I can tell, Adobe hasn’t officially announced the new version of Flash yet, and even though it’s been demoed onstage at a trade show, I think Adobe wants to keep the new software under wraps until the Adobe Max conference begins next week. So there’s not much extra information about the new version of Flash, when it will be available, or whether it will support non-NVIDIA hardware. But you should be able to expect those answers soon.