As promised, Nubia is taking pre-orders for its Red Magic gaming smartphone through crowdfunding site Indiegogo. Early adopters can reserve one for $399, and the phone is scheduled to start shipping in May.

The company says it’ll ship phones to Europe, the UK, Australia, Brazil, Russia, India, and a number of other countries in Asia and the Middle East. But potential customers in the US and Canada will have to wait.

Nubia says the phone isn’t currently optimized for use in North America, but that it’s working on a version for that region that should be available this fall. 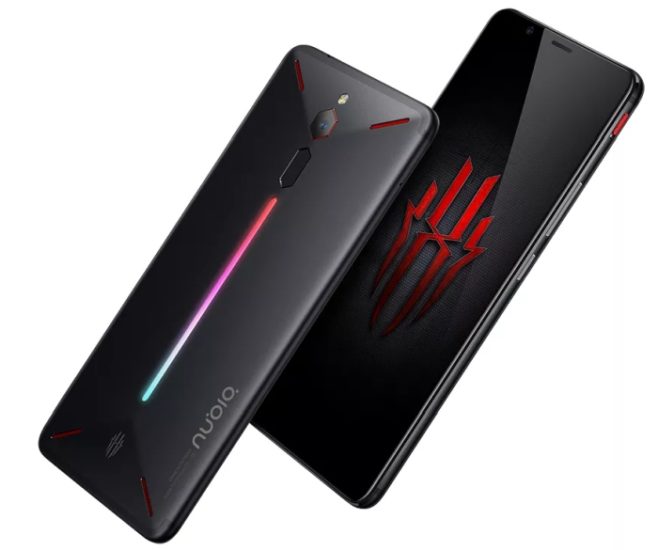 The Red Magic smartphone has a few distinctive design elements that help it earn its gaming street cred… even though it plays the same games available for any other Android phone.

First, there’s an RGB LED light strip on the back with support for 16 million colors and four different lighting effects. It’s more of an eye-candy feature than anything else, but it certainly makes the phone distinctive.

Next, there’s a custom cooling system with extra graphite layers, a convex shape to help dissipate heat, and three cooling ports on the back of the phone. There are no fans and no liquid cooling system, but Nubia says these design elements should help keep the system cool under load.

The company also put a dedicated “GameBoost” button on the side of the phone. Flip it on and it’s said to boost performance, while also disabling notifications for a distraction-free gaming experience.

As far as conventional specs, here’s what the Red Magic offers:

Nubia says the phone’s list price will be $529, which means that folks who pre-order can save $130.

If you’re waiting for a version of the phone that supports North American carriers, Nubia is offering an “exclusive voucher” option through Indiegogo. You can pay $9 to get a voucher good for $50 off the price of the phone when it goes on sale in the US and Canada… if that ever happens.

Nubia operates as an independent company, but it started its life as a subsidiary of ZTE… which is kind of on the outs with US regulators at the moment.

Update: The company says it is working on a version of the phone that supports North American wireless networks and plans to ship it by this fall.

In an update to the crowdfunding campaign, the company clarifies that folks who pledge $9 for a $50 voucher now will get two codes: